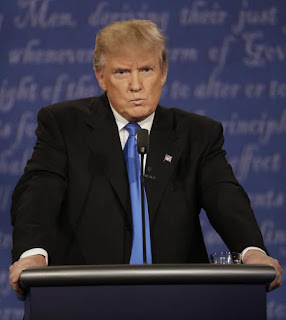 You know at 3 in the morning he still looked like this.

It's like a train wreck Trump just keeps causing:

Speaking by phone from a campaign swing in Michigan, he said that he was “absolutely disgusted” that Mrs. Clinton had allied herself politically with a Miss Universe winner, Alicia Machado, whom Mr. Trump had derided for gaining weight.

Mr. Trump said that Mrs. Clinton, who has portrayed Ms. Machado as a victidm of Mr. Trump’s cruel insults, had “made this young lady into a girl scout when she was the exact opposite.” He asserted, without offering any evidence, that Ms. Machado had once participated in a sex tape.


It's Friday night, and he just won't let go of it.  I don't even understand how Clinton has made Machado a "girl scout".  But Trump and Roger Stone are sure they have their finger on the pulse of America, especially American women:

He said he was bringing up Mr. Clinton’s infidelities because he thought they would repulse female voters and turn them away from the Clintons, and because he was eager to unsettle Mrs. Clinton in their next two debates and on the campaign trail.
....
Some of Mr. Trump’s advisers have tried to suggest focusing on accusations that Mrs. Clinton tried to discredit women who said they had been harassed by Mr. Clinton. Chief among those suggesting this approach is Roger Stone, the longest-serving Trump adviser, who wrote a book called “The Clintons’ War on Women,” laying out accusations from Juanita Broaddrick and Kathleen Willey, who have accused Mr. Clinton of sexual assault — accusations the Clintons or their lawyer David Kendall have denied.

It's like they both think if Gingrich had just tried harder to sell this line in the '90's, Gingrich would still be Speaker.  Instead of what actually happened, where Gingrich resigned and Clinton left office with approval ratings rivaling Obama's now.

At this point Hillary doesn't have to prepare for the next debate.  She can just say "Alicia Machado" over and over, and Trump will howl to beat Pavlov's dogs.  As NBC News said:

Still reeling from Monday's widely panned debate performance, the Republican nominee has found refuge in a fringe media environment where his victory is assured, his setbacks are the result of shadowy plots, and his critics are humiliated by sordid revelations.

And the two candidates have diametrically opposed takes on this tempest in a teapot.  Trump says:

“Why would I have regrets? I’m a very truthful person, and I’m telling the truth. Now people understand it. And before the tweets, people didn’t understand it.”

Of course, there's the matter of what they understand:

“I mean, his latest Twitter meltdown is unhinged, even for him,” Mrs. Clinton said on Friday.

“Really, who gets up at 3 o’clock in the morning to engage in a Twitter attack against a former Miss Universe?” she asked.

Truth, as always, is a matter of understanding; not a matter of what Donald Trump insists it is.

We conclude with a timely reminder:  early voting has started.  Those votes are as valid as any cast on the second Tuesday in November, and they are cast in stone.  Impressions the candidates are making now are driving voters to the polls early, already decided.   And in Houston, voters are being encouraged to register to vote at taco trucks, which are very popular here.  It isn't likely many of those voters are going to be Trump supporters.

At least half of America will be able to vote before November, and if Trump is this easy to bait, the decline in his support is likely to continue.  More and more the "Nowcast" at 538.com could be how voters are voting, now.