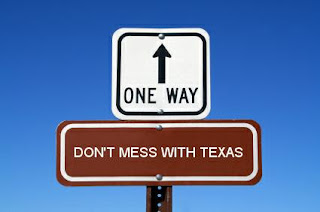 Nobody wants to believe it.  The "smart money" still says Trump will walk away with Texas' electoral college votes.  And he may well win them; but it may not be in a walk.  Could Trump lose Texas?  It's a question being discussed in the state, if not outside it:

It’s a question most Texas politicos aren’t used to asking, let alone having to debate: How close, really, is the presidential race in the Lone Star State?

Less than eight weeks before the November election, GOP presidential candidate Donald Trump has a 7-point lead over Democratic rival Hillary Clinton in Texas among likely voters, but only a 1-point lead among all registered voters, according to results of the Texas Lyceum poll released Thursday.

The poll is the latest to suggest that the deep red state of Texas might witness a closer-than-usual contest this fall. It comes even as new national and battleground state polls show the race tightening and Trump gaining in ways that indicate that a Clinton victory, which just after the party conventions in July seemed almost a foregone conclusion, is now anything but a done deal.

Three polls now (the Lyceum poll, an NYT/CBS News poll, and a WaPo poll) show the race is much tighter than it should be in Texas.  And these poll results presume a balance in GOTV efforts by both candidates; but Trump just appointed his state chair for his campaign three days ago.  The Lyceum poll also predicts a high turnout of Latino voters in Texas.

And never in my life, at least not since the GOP started to turn the tide in Texas (and we went overnight from a one-party Democratic state to a one-party GOP state) have I seen the words "a foregone conclusion is now anything but a done deal" in a story about Texas politics.  You can see that in all the reports that expect, at worst, a "closer than usual" result in November.  I dunno.  Dan Patrick as your campaign manager might help Trump in Texas with die-hard Republicans; but even Dan Patrick can't invent a state wide GOTV effort in 30 days or less (early voting in Texas starts October 24th).  If you think GOTV doesn't matter, then you haven't been paying attention to the Voting Rights Act/Voter ID suit currently churning in federal court or to how much effort North Carolina legislators put into ending "souls to the polls" in that state.).  These things matter, and are baked into statistical models about "likely voters" and election results.  But what happens when those expectations are themselves unreliable?

I'm not saying we will find out in Texas; I'm just saying there's a strong likelihood we will find out.  When Hillary Clinton (!) is within striking distance (in the latest poll; earlier polls put it closer) of the MOE, the times they are a-changin'.  Anecdotally, I assigned an essay on a speech by Hillary Clinton (a standing assignment I've used for years, because it's in the textbook).  Not one essay had anything but praise for Hillary Clinton.  If the young people vote in Texas, it may be Trump's race to lose; and he may be the only Republican who could lose it.

I'm not trying to "unskew" the polls, or predict an unexpectable outcome.  I just find it interesting, and it will be interesting to see what happens in November.