"The Revealing Science of God" 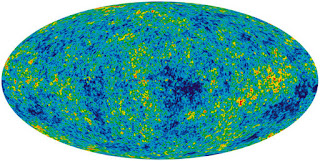 I suppose this one needs a soundtrack....

But, as with the preference for WIMPs over axions and sterile neutrinos, some physicists suspect the widespread distaste for modified gravity is at least partially due to the sociology of scientists rather than the scientific process itself. “Modified gravity isn’t ‘pretty’ in the eyes of particle physicists,” says Sabine Hossenfelder, a theorist at the Frankfurt Institute for Advanced Studies in Germany. “Inventing new particles is what particle physicists do for a living; of course that’s what they prefer.”

Whatever their preferred candidate might be, the biggest concern for many physicists grappling with dark matter is not that the concept will eventually be seen as somehow invalid or entirely mistaken — the observational evidence for dark matter’s existence is overwhelming. Instead they worry that dark matter’s identity might simply prove to be irrelevant to other great mysteries in physics and thus offer no new paths toward understanding the true nature of reality.

“The desire is for dark matter to not only exist but also to solve other outstanding problems of the Standard Model,” says Jesse Thaler, a physicist at Massachusetts Institute of Technology. “Not every new discovery can be a revelation like the Higgs, where afterward theories suddenly fit together much better. Sometimes new particles just make you say, ‘Who ordered that?’ Do we live in a universe where each discovery leads to deeper, more fundamental insights or do we live in one where some parts have rhyme and reason but others don’t? Dark matter offers either possibility.”

The amusing, and obvious, comparison is to critics of religion who claim the religious just see what they want to see, and refuse to face the hard truths of reality (building on the observations of David Hume, in essence).  Except:  "Inventing new particles is what particle physicists do for a living; of course that's what they prefer."

One of the base lessons of religion is humility:  that what you prefer is not necessarily what the world is meant to provide.  Understanding the mind of God is a worthy pursuit; assuming you can understand the mind of God is a fool's errand.  But if medieval theologians were obsessed with how many angels could dance on the head of a pin, what are physicists looking for?

And assuming the existence of God is simply a baseline.  Interestingly, "the observational evidence for dark matter's existence is overwhelming;" but where is it?  What is it?

The decaying theoretical underpinnings for simple WIMP models, paired with the ever-growing list of empty-handed detection efforts, have led Feng and many others to propose that WIMPs are part of a much more complicated picture: An entirely new hidden realm of the universe filled with multiple varieties of dark particles interacting with one another through a suite of dark forces, perhaps exchanging dark charges via bursts of dark light. Because they offer theorists many more variables to play with, such “dark sector” models can be reconciled to fit into the ever-tighter straitjacket of facts placed on dark matter by new data.

Yes, this is how science "works," but the end result one day will be a mathematical explanation few people on the planet can understand, and a report of an observation by a device everyone will have to accept on faith (trust) is being accurately interpreted and properly operated.  Because it isn't just particle physicists who prefer a certain outcome.

I'm really struggling to slip a piece of paper between this effort and the more arcane efforts of medieval theologians (when God was used as a way to explain everything; when God was the "Grand Unified Theory.").  One doesn't have to say either effort was wrong to ask:  why is one effort superior?

It's the commonly paraded critiques of religion that are my target.  Do those critics not see that when they point one finger, three more are pointing back at them?

It's not that these statements 'prove' science and theology slide into each other at some point, any more than the failure to "discover" dark matter proves there is no such thing as "dark matter."  But a universe where not every discovery is a key to unlock the doors of perception to further understanding?  What is so surprising about that?  And if that realization provides a sense of humility about the "power" of science, then it is well to remember that "humility" is a very religious concept.
Posted by Rmj at 9:20 AM