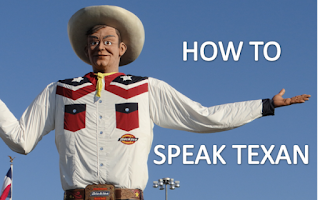 For no reason other than to opine on something besides Trump:

Non-Texans, even Brits with all their training; can't get it right.  It's subtle; but as a native Texan, I can tell the difference.  Tommy Lee Jones just lands it right.  To listen to him in "No Country for Old Men" is to listen to a native born Texan talking, even when Mr. Jones can talk like he's not from Texas at all.  McConaughey almost always sounds like he's from Texas; and Ms. Spacek can do the "southern girl" from somewhere south of the Mason-Dixon just fine; but to my ear, she almost always betrays her East Texas roots (she grew up not far from where I did).

I've had people tell me I don't sound like I'm from Texas.  I think I spent too much time watching TeeVee as a child, acquiring that Midwest non-accent accent of TV news anchors in the '60's and '70's.  Then I talk to family members or old friends (my wife is still amazed how much my accent changes when I talk to my brother; she did the same thing talking to her sister, though; and like me, never noticed it).

The Texas accent is subtle and inimitable and very regional.  There's one from Dallas (my father had it; he could sound way too much like Ross Perot, although without Perot's nasal qualities).  There's one for Central Texas, and another in the German areas of Central Texas; and a variety for south Texas, and the Panhandle, and East Texas; and variants within those regions.  Southern accents are as variable as states and regions in the states, too; and nobody sounds like a proper Cajun except a proper Cajun.  I garonteee.  (and yes, you have to be of a certain age and region to even know what that means).

Brits can sound American, in the generic sense.  It's always surprising to hear David Tennant's native, and thick, Scottish brogue.  I can't place his English accent (apparently Christopher Eccleston sounds like someone from Northern England, or did as the Doctor), but it's very different from his native accent.  I suppose to some I sound the same way, unless I'm talking like a Texan.  An East Texan; there's more drawl in my twang than there is bobbed wahr, but I do talk about awl fur the car, and add syllables to almost every word, and ahm usually fixin' to git around to it.

Which is whut ah need ta be dooin' raht about nahw, think to come of it.