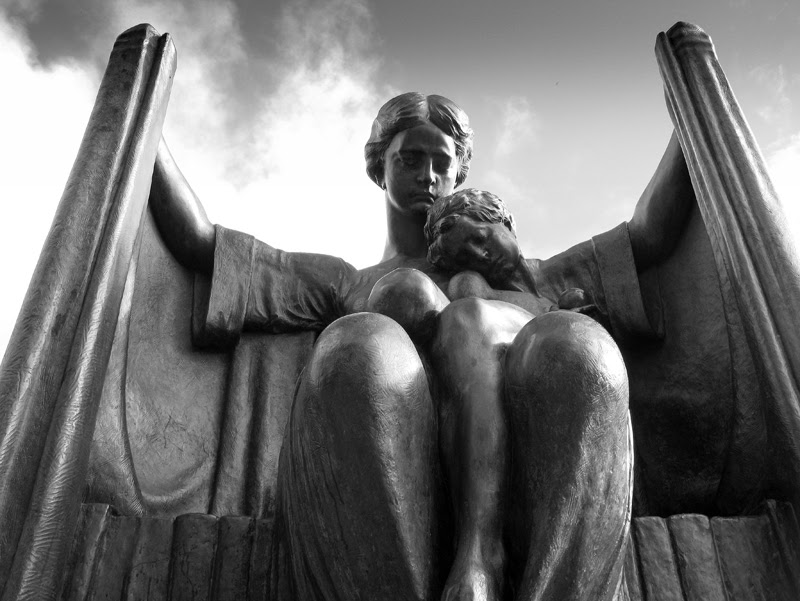 I think the very nature of belief in God that is common to the monotheistic religions lends itself to that kind of serious consideration in a way that atheism doesn't naturally hold.  But first there is the choice to believe that reality is real and consequential.

This identifies quite nicely a critical turn in my own thinking.  For anything to be of any consequence, one must first believe that reality is real and consequential.  If human life is a mere ephemera, a flash of light in the eternal darkness, a speck of dust in the endless void of space, a tick of the watch in measureless eternity, then reality itself is neither real nor consequential, but merely    and false perception.  If, however, reality is real and consequential, then the question holds true for all of us: "How should we then live?"

That can be a philosophical question, or it can be a religious one; it can be an ethical inquiry, or a moral one.  The point is it can be asked, and even if the answer is a Buddhist claim of illusion (I won't distort Buddhism or demean it by assuming to know its tenets when I don't), even that claim assumes reality is real and consequential.  We start there, or we cannot move on.

So we set aside Descartes cogito.  No real effort; but no small feat, either.  That cogito is considered the foundation of modern philosophy, which is to say "modern" (v. ancient) thinking, but it is a principle that extends back to Plato.  Descartes really only sheared away (or allowed the shearing away) of the religious trappings Plato had acquired since the 4th century; he didn't really plant a flag on a fundamentally new firmament.  To abandon the cogito is not to move against, or even away from, Plato fundamentally; but it is to move away from that subjective insistence that human thought is all we know, and all we can know.

Or at least we now have grounds for doing so.  Hans Kung is not exploring a new continent, either.  He is largely bringing Catholic teachings into the 21st (late 20th, actually) century.  But everything old is new again, and to understand reality is real and consequential is to understand that the answer to the question "How should we then live?" can have real importance.

Do we pursue fame?  Money?  Absolute authority on the internet? ("SOMEBODY ON THE INTERNET IS WRONG!")  The obliteration of all that outrages us about sharing this planet with other people (the apparent raison d'etre of most internet discussions)?  Do we chase God and pursue salvation and live our lives as strictly within bounds of "morality" as we possibly can, hoping to find favor in the hereafter?

Or are we our brother's keeper?  Should we be first of all?  Or last and least of all?  How should we then live?

To quote myself from another time and place:

Our hope is not in the victory, but in the defeat; our hope is not in the one so powerful he will save us all, but in the one so powerless he is willing to die for us all. Our hope is not in overcoming, our hope is in being found worthy because of our willingness to place service above everything else we know, to make service the reason for everything we do. Our hope is in the reversal of what we expect. If our hope was only in our gain, we would reach a point where all we could expect was to hold tenaciously to what we had, to keep it "ours" for as long as we could, to protect it against all other claimants and cry "no fair!" to the driver when someone else claimed to right to ride shotgun. We have to restore our claim to priority over and over and over again, and it takes all our energy, and we can never be certain we’ll prevail again. That condition is permanent.