The State of the Union

He shall from time to time give to the Congress information of the state of the union, and recommend to their consideration such measures as he shall judge necessary and expedient;

This "report" is included in the Constitution to remind the President that he reports to Congress on a regular basis.  In the era of the Imperial Presidency, it has become a grand-standing event.  In the Age of Trump, it has become all about the pictures.  Donald Trump was forced to back down when Speaker Pelosi told him the invitation was suspended until after the government shutdown (which he ended, because he began it) was ended.  Trump wanted the pomp and ceremony of speaking to a joint Session of Congress from the well of the House so badly he could taste it, and when he got the chance, he tried to get back a little of his own:

“We should point out, if the speech started abruptly — especially to fans of history watching at home — she was supposed to introduce the president,” Brian Williams reminded.

“The language we’ve become used to, ‘the distinct pleasure and high honor,’ followed by a volley of cursory applause, but the president jumped in before the speaker could introduce the president,” he explained.

If you're explaining, you're losing.  Besides, a picture is worth a thousand words: 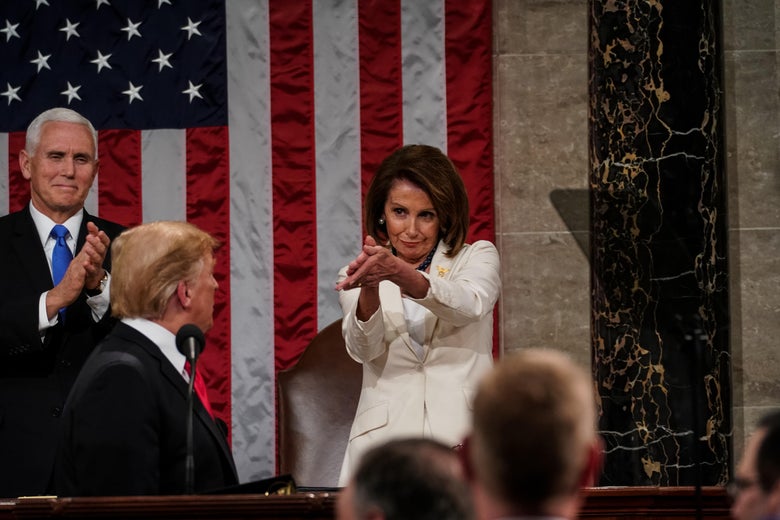 Dan Rather is right; no one is going to remember this speech.  That picture, however, is eternal.  As well as a good reminder of what the SOTU is about.
Posted by Rmj at 11:19 PM