When none of the witnesses saw anything... 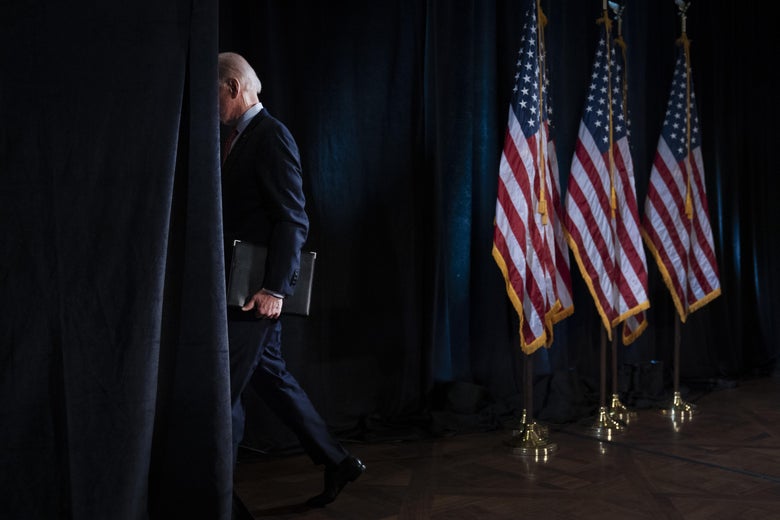 ....are there any "witnesses"?  Or:  does Christina Cauterucci realize her argument is being undercut by the editors at Slate?  Or is it just a bait 'n' switch to get you to read her article?  What is it about Slate and legal matters, anyway?

Here is the headline and sub-headline:

The Witness Who Saw Nothing

Reporting on sexual assault too often relies on testimony from people who weren’t there.

Now first I have to say reporting is not testimony.  Nobody answers a reporter's questions under oath. So there is no "testimony" involved in these stories about whether or not Joe Biden sexually assaulted  Tara Reade in the 1990's.  But there is the problem of "witnesses" when no witness saw anything, and the strongest witnesses are dead people (Reade's mother) and a friend.  Their only "evidence" is hearsay, which courts generally (there are more exceptions to the rule than applications of it) exclude for perfectly sound reasons.  The problem of no witnesses at all seems to be one Ms. Cauterucci is oblivious to; and even her editors know it.

Let me be clear:  I'm not arguing for or against Joe Biden, or accepting or rejecting the claims made by Ms. Reade.  But Cauterucci seems to want all claims (there is no evidence of anything, nothing has gone to a court of law) decided in favor of the accuser, and no questions about the accusations to be deemed credible.  If Ms. Reade were in court, even the claim that it is her mother's voice on the recording from 1993 would be a question of fact to be determined by the jury, not by Ms. Reade's assertion.

Over the past few days, multiple new reports have corroborated Tara Reade’s claim that Joe Biden sexually assaulted her when she worked in his Senate office in the 1990s.
....
The Business Insider piece also quotes several people who confidently refute Reade’s claims.

It's the latter, she argues, that is the problem here.  Why?  Basically, it's bad journalistic practice.

It does no service to the truth to quote people who say their failure to witness abuse is evidence of the absence of abuse, unless the alleged victim claims those specific people witnessed her abuse. Writers might want to show they did due diligence in their reporting, but sources that don’t offer new information go unmentioned in final drafts all the time. (There’s also a big difference between quoting someone who solely speaks to her own experience and someone who makes a broad assumption of innocence based on that limited perspective.) An allegation of a sexual violation that involves two people doesn’t demand clueless character witnesses. Only an exhaustive search through Biden’s Senate papers, which the University of Delaware will not release until two years after Biden exits public life, could help prove or disprove the existence of the sexual harassment complaint Reade said she filed—not the testimonies of a self-selecting group of people who agree to say on the record that they never saw it.

So, sexual harassment allegations are just like theft allegations.  Except in the latter, without evidence the theft actually took place, and that the accused was in possession of the stolen property, there is no "evidence" of the crime.  That's not a standard Cauterucci wants to apply to sexual harassment, however.  And complaining about "evidence of absence of abuse" assumes there was abuse, and the burden is on the accused to prove an absence of it.  However, sexual harassment especially is usually proved by a pattern of conduct and the testimony of a number of victims:  that's how Bill Cosby and Harvey Weinstein ended up behind bars on sexual assault charges.  Allegations are not evidence, either; so an investigation that finds some people say they heard about it, and others say they never saw any such thing happen or had reason to suspect such behavior, is perfectly admissable in a court of law.

But Ms. Cauterucci doesn't want to hold to the standards of a court of law; apparently she much prefers the standards of gossip and innuendo.  What service to the truth is that?   Even outside the courtroom we usually think it fair to demand a bit more than that. And if Reade did file a sexual harassment claim, what then?  Does that prove her allegations, and refute the information (it's still not testimony) of the people who stand by Joe Biden's character and their experience working with him?

Well, a jury sitting as a trier of fact might think so; but they might not, too.  And that vexes Ms. Cauterucci mightily, apparently.  So much so that even the editors at Slate understand the weakness of her argument.  Sauce for the goose is sauce for the gander.  Witnesses who don't see anything are not terribly strong witnesses, no matter which party they are asked to remark on.