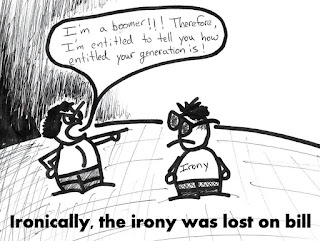 I wasn't going to post this, but then I stumbled across this via a different link from NTodd (thanks, NTodd!*).  And I decided "what the heck," because intergenerational sniping is "in play," and besides, Kevin Drum barely touched on the topic.  So here it is, in it's original form:

The more time I spend around Millenials, on-line at least, the more I hear history repeating itself.

First, the very idea that a cohort is created by arbitrary divisions of the calendar and birth years is a bit of foolishness invented for, but not by, Baby Boomers.  Later we had to extend the concept back to "Builders" or "The Greatest Generation," but inevitably it went forward, steam rolling over "Generation X" to land on "Millenials,"  Who are nothing more than the Baby Boomers of the Baby Boomers.  The whole idea of labelling "generations" is itself just a version of astrology (does your birth date really determine your personality and fate?), but as with so many things we take for granted now, Boomers are the ones who made it normative.

Millenials think they are going to change the world, simply by sheer numbers and ideological enthusiasm (oh, and technology).  And they think this is new.

Boomers were told they would change the world, and would do it through sheer numbers and technology.  It's one reason college campuses erupted with protests in the late '60's into the early '70's, and then the country erupted with bombings and destruction which we've generally pushed down the memory hole, even though it was domestic terrorism before we had the label "terrorism."  Go back and watch "Network" again; the gang that ends up shooting Howard Beale to death on camera wasn't just a caricature of the Symbionese Liberation Army that captured Patty Hearst; the SLA itself was a real-life parody of many violent leftist groups in that decade.

We weren't all dancing like John Travolta through those years.

Millenials are already nostalgic for the TV shows and toys of their childhood.  Boomers did that first.  We invented nostalgia for childhood, on a level unimaginable by even Willie Wordsworth, the guy who taught us all to appreciate our "innocent youth."  We swamped Millenials with our nostalgia; they couldn't help but grow up with it, and yearn to be nostalgic for their lives.  But we at least waited to be nostalgic until we were in our forties; millennial start it as soon as they turn 18.

And computers were going to change the world, starting with education (remember "Computers in Schools", anybody?).

Boomers had film strips and movie projectors and all manner of paraphernalia for education.  It was always an excuse for a dark room and some form of entertainment that beat listening to the teacher or going up to the chalkboard.  And that's really all it was.  I suppose in some tangential way Disney's film about atomic energy (I just remember the word "FUSION!" uttered in dramatic tones, and some very Disney-esque animation) prompted me to read about atomic physics while in elementary school, but I'd hardly call that a pedagogical win-win, or even a sign of success.  I'm pretty sure I was reading about atoms before I saw that film, anyway; but maybe not.  We had a reading machine which would show us a text at 600 wpm, too; that one taught a roomful of kids to read fast; or maybe to have short attention spans, I never figured out which.  I can say the pedagogical advantage of speed reading is nil, since I don't read at 600 wpm anymore, and pretty much quit doing that soon after the machine was turned off.

Television, of course, was already a 'vast wasteland' by the time we were in school, and wasn't present on any school campus I ever attended.  Now they are ubiquitous.  Even my college classroom has a screen and a projector, this time connected to a computer.  Remembering what advantage we took of dark rooms in elementary school, I never turn the thing on.  Modern technology is not even laptops anymore, it's "smart phones," which are not used for education but distraction.  Remember the unfortunate student who was manhandled out of her classroom?  She was "disrupting" the class by paying attention to her cell phone rather than the teacher.  Believe me, kids in classrooms don't use the internet to educate themselves; well, not on academic subjects, anyway.  The "vast wasteland" is global, now.

And TV's wasteland is vaster, too.  Technology hasn't replaced television, it's made the enterprise of entertainment more firmly rooted in society than ever.  Boomers didn't invent TV; but we're the generation that made it normative.

Boomers pretty much invented the popular music industry, too; simply by being such major consumers of it.  Come to think of it, that's what's pretty much killed my interest in music, period.

You're welcome; too, also, as well.

You can thank the Boomers for all of this, if you want.  What you can't do is give Millenials much credit for originality; because it's true that everything old IS new again.

I really hope they can do better with it than we did.