Of brillig and slithy toves..... 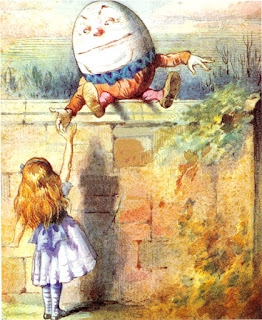 Now we must be very afraid of religious extremism.  It promotes violence, as it did (maybe; maybe not) in Colorado Springs, at a Planned Parenthood center.

As the Pope said, we don't understand the way of peace.  And, by and large, we don't want to.

But religion is not the source of violence in the world, not the original sin which, if extirpated, would lead to a new millennium and a thousand years of peace.  In the '70's, already forgotten in the wave of nostalgia for disco, violence came directly from politics, and directly from left-wing groups.  Paddy Chayefsky captured it perfectly in "Network" and "Hospital," but we laugh off the group that guns down Howard Beale in the final scenes, and ignore the chanting crowds outside the hospital in favor of more growling from George C. Scott and more sex-kittening from Diana Rigg.   Someday our collective amnesia will fail and we'll remember fully the Bader-Meinhof Gang and the other sources of terrorism in America and Europe.  For now, however, we have washed over it, and the current crop of "new atheists" on-line and in the public eye who weren't even a gleam in their father's eye at the time, are convinced they know all they need to know because ignorance is bliss, and ignorance of history is especially happy.

Was Robert Dear motivated by religious belief to attack a Planned Parenthood clinic?  Or is he a paranoid schizophrenic who mentioned "body parts" because the words mean as much to him as the opening stanza of "Jabberwocky" mean to the rest of us?  At this point we simply don't know, and yet we want to have a motive, and we want to have one right now!  It may be that the media is hesitating to identify this crime as terrorism, or to ascribe a religious motive to it; but I don't think that's "malign hesitation."  I think in this case it may well be justified caution.*

After all, once we've established the narrative of "what happened" in that Colorado Springs clinic, it will be the story of what happened even if it isn't the story.  Most of what we know about Columbine and 9/11 isn't true (she didn't say "yes," the killers weren't methodical and robotic sociopaths, the hijackers weren't armed with box cutters), and not being true it serves one agenda or another, except the agenda of truth.  Was Robert Dear deranged by right-wing Christian extremists, or by FoxNews extremists; or was he just deranged?  The answer actually matters, especially in the context of a discussion about gun control and access to guns by the mentally ill.  If Robert Dear was suffering from a defined illness, it may be his story is grounds for restricting gun sales.  If he was simply unhinged by mass media, well:  what're ya gonna do about that?

Advent has begun.  The way of peace would be an appropriate meditation for the season.

*After all:  "The official said the 'no more baby parts' comment was among a number of statements he made to authorities after his arrest, making it difficult to know his specific motivation."