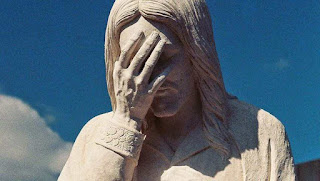 Because it's never racism:

CNN co-host John Vause responded, “If your camp is the French camp, then why is it that no one with the Muslim community knew what these guys were up to?”

“Sir, the Muslim community has nothing to do with these guys. Nothing. We cannot justify ourselves for the actions of someone who claims to be Muslim,” Louati answered.

“Why not?” Vause cut in. “What is the responsibility within the Muslim community to identify what is happening within their own ranks when it comes to people who are obviously training and preparing to carry out mass murder.”

“No, no, no, sir, they were not from our ranks,” Louati responded. “We cannot accept the idea that these people are from us. They are not. They are just byproduct of our societies exporting their wars abroad and expecting no repercussions back home.”

Co-host Isha Sesay tried to draw the discussion back to discussing the “bigger issue,” pressing the guest to answer why French Muslims go abroad to join the Islamic State.'

Louati said that’s an issue which stems from French foreign policy in the Mideast and failing domestic policies. He also said radicalization “does not take place in mosques,” but instead happens online and in the streets, away from organized Muslim communities.

But Sesay wasn’t satisfied, and asked whether the Muslims should be stepping up “in looking at the young people and the roads they’re going down” while “the finger of blame is points at the Muslim community, rightly or wrong.”

“You have to accept that responsibility to prevent the bigger backlash that comes your way when these things happen,” Sesay said, with her voice raised.

Louati launched into an impassioned answer about historic discrimination against Muslims at work and in French schools, and ended by asking “what else can we do?”

Vause steered the interview back in to end the segment, conceding that it’s “a very complicated issue.” Right after the network had cut away from Louati and back to the hosts, Vause concluded:

“You know, I’ve yet to hear the condemnation from the Muslim community on this.”

Sesay said, “The point he’s making is, ‘it’s not our fault.’ But the fact of the matter is when these things happen, the finger of blame is pointed at the Muslim community and so you have to be preemptive. It’s coming from the community. You’ve got to take a stand.”

Responsibility?  How does that work again?  To whom does it apply?  Certainly not journalists.