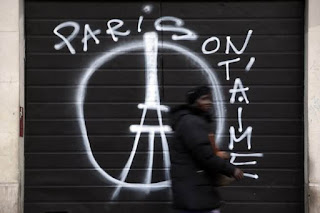 The attacks in France were an attack on "the civilized world."  I understand why President Obama has to say such things, although it was the "civilized" world that rendered Iraq and Syria "uncivilized" such that ISIS is now the terrorist organization par excellence in those two countries.  Besides, the "civilized world" makes attacks on the rest of the world all the time.

Ach, I wasn't going to to in that direction when I started this.  I was going to comment on the "magical thinking" the GOP wants to invoke, because while the President marked us as standing on the moral high ground (we use drones, not suicide bombers), the GOP complains that the President won't say "radical Islam."  Because unless we are war with "radical Islam," we will never defeat terrorism.

This would please ISIS no end.

So let's do it.  Let's play into their hands once again.  Let us prove to "barbarians" how "civilized nations" react.  Let us not just attack ISIS, let us make the crisis in Syria worse by calling it an act of insanity to allow even 250,000 refugees into the U.S.  At some point it doesn't matter what we think of Donald Trump; what matters is what people from the Middle East think of Donald Trump.