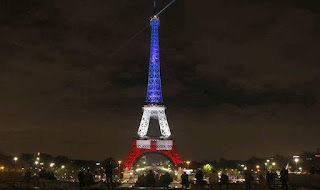 Something about violence unhinges people.

The crowd at Wembley stadium stood before the football match between England and France and sang the French national anthem.  The entire crowd.  Every spectator in the stadium, most of them Brits.  They sang for France, for Paris, and against ISIS.

And even as I admired it, I thought:  would they sing the Lebanese national anthem?  Show solidarity with the people of Iraq and Syria, the ones being slaughtered by ISIS on a scale that outstrips the massacre in Paris by geometric proportions?

No.  NOK, donchaknow.  Terribly impolite to point that out, but there we are.  The dead in Syria and Iraq and elsewhere in the "Middle East" are not Europeans, so we just really don't care.  Violence in Paris is far worse, because, after all, what have the French ever done to arouse the ire of ISIS?  Does it matter if they have?  No.  Violence is not justified because there is a reason, because "he started it!," because whether or not Han shot first.

So France retaliates against ISIS, and who is killed?  Does it matter?  No.  We don't hear names, we don't see faces, we only know violence is done, and this time it is good violence.  The violence in Paris was bad:  criminal, savage, suicidal, murderous.  Yes, yes it was.  The violence unleashed by France in response?  Good.  Just.  Cleansing.  Appropriate.

They even deserve more of it.


For our sakes who adore Thee, Lord, blast their hopes, blight their lives, protract their bitter pilgrimage, make heavy their steps, water their way with their tears, stain the white snow with the blood of their wounded feet!

Only instead of snow, it should be sand.  Otherwise, yes; that is what we ask for.  Terrible retribution, visited upon them because they so richly deserve it for what they have done!

And we?  What do we deserve for what we have done?  Quiet, safe lives?  Comfort?  Security?  Yes, we deserve that; but they don't!

ISIS isn't asking for comfort and security and peace, of course; they are asking for violence.  I heard the author of a news story on ISIS, in an interview replayed after Paris.  He described ISIS as a group of apocalyptic fanatics who want to convert the entire world to their brand of Sunni Islam, or failing that, to enslave it, exterminating some, keeping others in subjection.  It was a cartoon vision of the world, a comic book goal, the kind of world-conquest that fueled the actions of villains in the super-hero stories of my youth.  Even the comic books don't tell such tales anymore, but here was a journalist telling me that men in the world, deadly serious men, saw that as their moral imperative, as their vision, as their raison d'être.  It is still impossible to take it seriously.

But then we have governors declaring no Syrian refugee, the very people fleeing the violence of Syria, will be allowed into America, because:  PARIS!  When all the perpetrators of the crimes in Paris were apparently French citizens, none of them refugees.  This is as impossible to take seriously as the idea ISIS really thinks it will conquer the world in the name of a brand of Islam.  We seem to be governed by clowns and buffoons, or threatened by them.  And it is the violence that joins them:  their violence is as justified as ours is, but how you see that depends on which side you are on.

Or which side you are supposed to be on.  And comfort and security and peace are for our kind only.  Refugees threaten our freedom because of where they come from ("national origin," but ignore the Civil Rights Act of 1964, it has no purchase here, its language not a promise we always have to keep).  They are a threat because of our freedom:

“While the Paris attackers used suicide vests and grenades,” [Rep. Tony] Dale wrote, “it is clear that firearms also killed a large number of innocent victims. Can you imagine a scenario were [sic] a refugees [sic] is admitted to the United States, is provided with federal cash payments and other assistance, obtains a drivers license and purchases a weapon and executes an attack?” He urged the lawmakers to “do whatever you can to stop the [Syrian refugee] program.”

We don't need ISIS to make us afraid; we have the NRA.  They understand how violence unhinges us, too; and like ISIS, they use that for their own ends.  The critical difference is they don't foment violence:  they just make money off of it, almost accidentally.

Xenophobia is the most American form of violence.  It started with Columbus enslaving the natives, a practice Europeans took to with such alacrity it appalled even Columbus.  We've been at it ever since, but again, it is good violence (until it isn't), because it is our violence.  Yes, perhaps we need to examine with "humility, resolve, commitment [to what?] and an enlarged vision" our historical role in the violence of the Middle East; but frankly, that won't solve the problem of ISIS.  The violence in Paris is not something to be swept aside in favor of a grand national bout of navel gazing.  It is true the invasion of Iraq and Afghanistan lead directly to ISIS today, but so do the Sunnis backing the "Islamic State" in Saudi Arabia.  There is blame to go around, and none of it expunges the criminals of ISIS from responsibility for their crimes.  It is also true, however, that the past is past, and the present is Paris; and 27 GOP governors working to out bleat each other about how scared they are for the residents of their states, residents who probably wouldn't know a Syrian from a Siamese.  This is no time for thoughtful national moral reflection because there is never a time for thoughtful national moral reflection.  We are not good people who will save the world, purge it of its evil, provide a shining example of the good and true; and Barack Obama is not (thank history, at least!) Woodrow Wilson.

I stand with Reinhold Niebuhr on this:  nations cannot act morally, because they cannot ask their citizens to make the sacrifices a moral stance would incur.  We cannot be moral and protect ourselves from the crimes of ISIS.  We cannot defend ourselves from such madmen while at the same time examining our national moral culpability for the creation of chaos in the world.  Yes, we are responsible; but that is the way of nations.  This is a fallen state, the state of human existence; the nature of human governance and social order.  We have, after 2000 years, only got so far as Brits singing "La Marseillaise" with a handful of French people in a football stadium.  It's honestly the best we can do, and it's something.

That's something about which we need to think.  But whether it makes us change anything about the way we live, whether it brings out the "angels of our better nature" because after all, as Steven Pinker says, this is the best of all possible worlds (and if he didn't say it, he should have, if he were intellectually honest with himself), violence is as American as cherry pie, as human as being a social animal.

We've just got to keep working on the idea of who is in "our" society, and what we do about those who aren't.