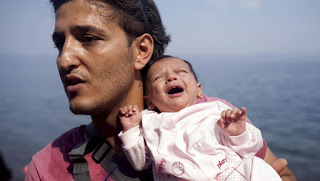 Now 34 governors are pleading to keep their states safe from Syrians.

Abdelhamid Abaaoud, the 27-year-old Belgian born extremist who authorities say planned the horrific attack on Paris Friday night, died Wednesday in a pre-dawn raid by security forces, according to French prosecutors, who confirmed his death on Thursday. He was reportedly killed by a sniper.

I just wanted to highlight that bit.  Oh, and the "Syrian passport"?  Probably a fake; or maybe it belong to a soldier loyal to Assad.  You know, one of the groups of Muslims fighting ISIS.

So, for the record:  no Syrians involved in the attacks in Paris.  Indeed, all the attackers seem to have been Europeans.  Screeching about interment camps for refugees and how state borders will be closed because of "Islamization" and how non-Christian refugees mustn't even be allowed into this country?  All exactly what ISIS wants to hear.

Terrorism works.  But only with our complicity.   We are far from the site of the latest attacks, and yet we seem to be the most sacred about them.  On the BBC World Service the reports from Paris and Brussels are of people who want to get back to normal life; who don't fear the refugees and don't fear their neighbors (all of the attackers in Paris were citizens of France or Belgium; none were refugees).  And this is what the President of France said:

"Life should resume fully," Hollande told a gathering of the country's mayors, who gave him a standing ovation. "What would France be without its museums, without its terraces, its concerts, its sports competitions? France should remain as it is. Our duty is to carry on our lives." In the same spirit, he added, "30,000 refugees will be welcomed over the next two years. Our country has the duty to respect this commitment," explaining that they will undergo vigorous security checks. Hollande noted that "some people say the tragic events of the last few days have sown doubts in their minds," but called it a "humanitarian duty" to help those people … but one that will go hand in hand with "our duty to protect our people." "We have to reinforce our borders while remaining true to our values," he said.


In America, far away from the assault on the city of Paris, far from the scenes of violence and even the press of refugees on our continent (Obama wants to allow a mere 10,000 into the country, or something like 1/10 of 1% of the number who have fled to Europe), life must grind to a halt until we can pass a law making sure no refugees from Syria ever enter the U.S.   President Obama has had some choice words about this hysteria:


"And so if there are concrete, actual suggestions to enhance this extraordinary screening process that’s already in place, we’re welcome -- we’re open to hearing actual ideas," Obama said. "But that’s not really what’s been going on in this debate. When candidates say, we wouldn't admit three-year-old orphans -- that’s political posturing. When individuals say that we should have a religious test and that only Christians -- proven Christians -- should be admitted -- that’s offensive and contrary to American values."

"I cannot think of a more potent recruitment tool for ISIL than some of the rhetoric that’s been coming out of here during the course of this debate. ISIL seeks to exploit the idea that there is a war between Islam and the West," he continued. "And when you start seeing individuals in positions of responsibility, suggesting that Christians are more worthy of protection than Muslims are in a war-torn land, that feeds the ISIL narrative. It’s counterproductive, and it needs to stop."

Obama then criticized politicians who describe themselves as "tough," noting that they are now afraid of women and children fleeing terrorism.

"These are the same folks oftentimes who suggest that they’re so tough that just talking to Putin or staring down ISIL, or using some additional rhetoric somehow is going to solve the problems out there. But apparently, they’re scared of widows and orphans coming into the United States of America as part of our tradition of compassion," he said. "First, they were worried about the press being too tough on them during debates. Now they’re worried about three-year-old orphans. That doesn’t sound very tough to me."

Finally, Obama worked in a hit on Congress and lawmakers on Capitol Hill's sudden interest in barring Syrian refugees from the country.

"With respect to Congress, I know that there’s been discussion about legislation suddenly surfacing around refugees," the president said. "I’ve been waiting for a year and a half, or more, for legislation that would authorize the military activities that we’re carrying out in Syria as we speak, and have not been able to get anything out of Congress. And now, suddenly, they’re able to rush in, in a day or two, to solve the threat of widows and orphans and others who are fleeing a war-torn land, and that’s their most constructive contribution to the effort against IISL? That doesn’t sound right to me. And I suspect it won’t sound right to the American people."

But now the GOP leadership of the country has lost its collective mind, afraid of toddlers and 50 year old women and non-Christians and just anybody who used to live in Syria and wasn't in this country last week, because fear is the little death, fear is the mind killer.  And the screening process? It is long and complex and can involve involve a retinal scan.    There is a young girl here in Houston, an American citizen of Pakistani parents, dying of a disease that cannot be cured.  Her parents cannot come back to America to see her before she dies, largely because they are Pakistani.  She has been here for 13 years, seeking treatment for her condition.  Her parents have never been able to visit her, and even now can't get a visa just on humanitarian grounds.  Now she has turned to her local Congressman for help.  That is how hard it is go get into the U.S. from some countries.

The people screaming about terrorist and refugees have lost their minds a long, long time ago.  I remember fondly now learning about an America that felt itself far removed from the strife of the "old world."  Thanks to technology we now seem to be scared to death of the world.

At least many of our leaders and would-be leaders are.