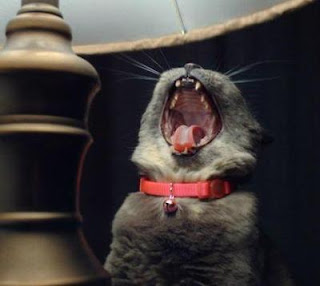 I have a cat who must have some Siamese in him.  He screeches like a lost soul, wails like an abandoned baby, howls like a banshee; and all pretty much because he can.  He does it to let us know it's time to wake up; he does it to let us know his food bowl is empty; he does it to tell us we're in the wrong room, and he wants us in another room, or he won't stop howling.  Sometimes he does it, in Wallace Steven's felicitous phrase, just to test the reality of the rooms he lives in.

This morning he was doing it just as NPR was telling me that cattlemen of Texas are upset that the WHO has said red meat causes cancer.  Never mind the WHO is wrong (they are), or that eating a hamburger or a hot dog is worse than smoking a cigarette (it isn't), or that once again I'm reminded of that scene in Woody Allen's "Sleeper" where the doctor tells him red meat is the best thing for you (Woody's character wakes up in the future, having run a health food store when he was frozen).  Cattle futures are down, which means the price being paid for cattle is down (because people will stop eating at McDonald's now, duh!; except, of course, they won't) and the ranchers are in a bad mood and wanna sue somebody.

No, seriously:  one cattleman said somebody in the WHO needs to be sued because that'll "stop this nonsense" right quick!  Except, of course, the people playing with the price of meat on the hoof are speculators and financiers, not a bunch of doctors in the WHO.  And when the WHO report is forgotten and meat continues to be popular, cattle prices will rise once again, and long before a lawsuit could even be filed.  Don't let those facts stop a good and useless rant.

The cattlemen sounded exactly like the people I read on the intertoobs who tell me that Christians need to stifle right wing fundie Christians because that's our responsibility; or the "liberal media" is to blame for Ted Cruz and Marco Rubio throwing kerosene on that trash fire again, because they give Cruz and Rubio cause to be so inflammatory.  Somehow; I don't know how.  But all these problems have simple solutions, if we'll just implement 'em!

My old cat yowls because it's the only voice he has and, like a character from a GEICO ad, it's what he does.  Sometimes the solution is to feed him; sometimes it's to go where he is and pet him into somnambulance; sometimes its just to ignore him until he gives up.  I'm beginning to think the population which has time to be on the internet is, by and large, just like my cat.  (and yes, I'm well aware of those four fingers pointing back at me, thank you very much!).  They make a lot of noise, but it's hard to figure out what they mean by it.

Seems true for that portion of the population that manages to get itself in the news, too.