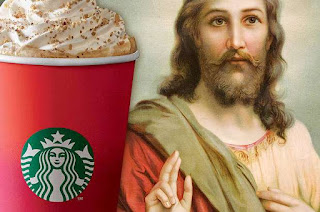 If I don't see Jesus in the foam on my latte, Christmas is ruined!

The sad part about the latest outbreak in the "War on Christmas"?  That this aspect of the story is getting so little attention:

Furthermore, even religious Christians are calling out this campaign as self-serving and nonproductive — the posts using Feuerstein’s #MerryChristmasStarbucks hashtag are overwhelmingly dismissive of the campaign, even from a religious perspective. Other commenters on the Liberal War on Christmas Facebook page raised genuine, valid concerns about the uselessness of attacking red cups, given the magnitude of suffering in the world. One wrote, “You did not share all the facts. You have a platform to share God’s goodness not to shame a company. Raise up your followers with a movement to open their own homeless shelters. To walk among the broken. To go and get coffee to go give to someone down on their luck this Holiday. Serve the coffee not point out their ‘mistakes’, actually, your lack of education is causing a really sad situation to a company, and possibly creating kahasis. Encourage your followers to buy a bag of coffe, brew, get some cups and write ‘God Loves You’ and pass that out. Just a thought.” As one Twitter user, Brian Green-Young, whose words were highlighted at Delish, wrote, “If you’re Christian & upset over Starbucks cups, your priorities are out of whack and you don’t have enough to do.”


You won't find that mentioned in any of the articles linked in this article at Slate.  Delish, as Salon notes, caught it.  But nobody mentions it as a counter to The Donald's assertion that he'll make us all say "Merry Christmas" if he's in the White House in December of 2017.  Nobody includes it as a response to this utter nonsense.*  It is the real story; that outrage doesn't beget outrage alone, but also gives rise to reasonable responses.

But the internet isn't about reasonable responses.  Reason doesn't generate clicks; rage does.

Then again, that's all the war on Christmas is, isn't it?

*I do the googling so you don't have to. You'll find no mention of it here, here, here, or here.  Even Snopes had to get in on it.  Of course, most of 'em use the excuse to complain about how commercial Christmas is.  Old news, fellas.