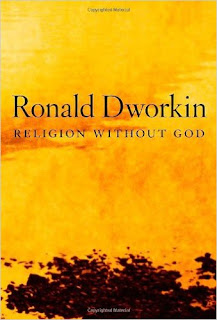 An excerpt from a book published a few years ago that I've never heard of, never seen, never looked for, and likely will never read.

What, then, should we count as a religious attitude? I will try to provide a reasonably abstract and hence ecumenical account. The religious attitude accepts the full, independent reality of value. It accepts the objective truth of two central judgments about value. The first holds that human life has objective meaning or importance. Each person has an innate and inescapable responsibility to try to make his life a successful one: that means living well, accepting ethical responsibilities to oneself as well as moral responsibilities to others, not just if we happen to think this important but because it is in itself important whether we think so or not.

The second holds that what we call “nature”—the universe as a whole and in all its parts—is not just a matter of fact but is itself sublime: something of intrinsic value and wonder. Together these two comprehensive value judgments declare inherent value in both dimensions of human life: biological and biographical. We are part of nature because we have a physical being and duration: nature is the locus and nutrient of our physical lives. We are apart from nature because we are conscious of ourselves as making a life and must make decisions that, taken together, determine what life we have made.

For many people religion includes much more than those two values: for many theists it also includes obligations of worship, for instance. But I shall take these two—life’s intrinsic meaning and nature’s intrinsic beauty—as paradigms of a fully religious attitude to life.

Well, okay; but this renders anything but the purest nihilism as "religious."  We either live like Camus' narrator in "The Stranger," or we live like ordinary human beings, and that makes us "religious."  Which makes religion impossible to distinguish from atheism, or Buddhism (as it is commonly described, being more a philosophy than a "religion") from any other world religion.  In other words, we are all religious, or none of us are religious.

Mind you, that may well be true.  But if we are all religious, how does one define a "religious attitude" apart from simply being a human being?  And again, mind you, maybe that's the point; but somehow I don't think so.  Unless Dworkin is just trying to distinguish between "religion" and "monotheism," because the title of his book (and presumably his thesis) is Religion Without God.  Not "gods;" "God."

Already, ab initio, out of the starting blocks, we have a problem.

No, because interpersonal agreement is not an external certification in any domain. The principles of scientific method, including the need for interpersonal confirmation of observation, are justified only by the science these methods have produced. As I said, everything in science, including the importance of shared observation, hangs together: it rests on nothing outside science itself. Logic and mathematics are different still. Consensus about the validity of a complex mathematical argument is in no way evidence of that validity. What if—unimaginable horror—the human race ceased to agree about valid mathematical or logical arguments? It would fall into terminal decline, but no one would have any good reason, along the way, to doubt that five and seven make twelve. Value is different still. If value is objective, then consensus about a particular value judgment is irrelevant to its truth or anyone’s responsibility in thinking it true, and experience shows, for better or worse, that the human community can survive great discord about moral or ethical or aesthetic truth. For the religious attitude, disagreement is a red herring.

Dworkin neatly elides the distinction between techne and sophia that goes back to the Greeks (in western culture, at least.  Dworkin doesn't really address Asian culture, which is another lacunae in his determination to set the boundaries of what we can validly think.)  Science is actually techne; it is knowledge about what makes columns hold up a roof and create a building.  It is not sophia, knowledge about how we should then live.  There's a reason Plato continues to eclipse Aristotle, and it's not just because the student cannot exceed the master (that's a canard masters love to use to claim their place in history).

If the human race ceased to agree on "valid mathematical or logical arguments," what would happen? Not much.  Logic, formal logic, doesn't have that great a hold on human society.  It's really rather dry stuff, and leads to Bertrand Russell spending years and pages to prove, by logic, that 2+2=4.  He really did that, and it was considered a major breakthrough that led him and Whitehead to compose Principia Mathematica.  Until Kurt Godel came along and destroyed the entire effort in a rather short but world-changing essay.  Russell spent the rest of his career harassing Wittgenstein and declaiming against nuclear weapons, and Whitehead created a philosophy which became the basis of a short-lived and little known branch of modern theology.  Sic transit gloria, and so much for the foundational nature of valid mathematics or logic.  Yes, we might lose our computers and some of modern technology; but the fear that we will revert to barbarism given the slightest decline in our standard of living is another canard.  I'd say at least 2/3rds of the world still lives off the detritus of the First World (China is advanced only in Beijing and a few pockets; most of the country is still woefully primitive, by U.S./European standards), and gets by as humankind has done for millennia without most of what modern science has provided.  But they suffer from our garbage, our heavy metals discarded, our poisons and immortal plastics and all the rest.  What logic or valid math allows us to think we can continue to exploit the planet and the people of the globe as we have done?  Is the unimaginable horror that we will cease to agree about math and logic?

Really?  Because the logic of killing someone before he can kill you seems to have become quite compelling, and I'm not sure just how well we can survive this great discord about moral or ethical truth, or how logic and mathematical validity rise to this challenge.

The heart of my argument is the following assumption. The conventional, theistic religions with which most of us are most familiar—Judaism, Christianity, and Islam—have two parts: a science part and a value part. The science part offers answers to important factual questions about the birth and history of the universe, the origin of human life, and whether or not people survive their own death. That part declares that an all-powerful and all-knowing god created the universe, judges human lives, guarantees an afterlife, and responds to prayer.

That's not "science" at all; not in the conventional sense of the word, not in any sense of the word.  Indeed, this argument elevates science so it can replace religion, an argument that's been going on for centuries (and largely ignores the place of science in the life of the religious, like Mendel and LeMaitre, to name but two).  This is not insightful, it's sloppy reductio reasoning.  But then philosophers of religion never try to define "religion;" they recognize the impossibility of the task.  Dworkin rushes in where angels fear to tread.

The "important factual questions" he identifies here are nothing of the sort.  The first two chapters of Genesis do not describe in any scientific sense (as the word is commonly used) the creation of the world.  They tell a story, part theological (the Creator speaks, the ultimate "speech act", and creation is.  It isn't done, formed, acted upon by others at the direction of the speaker; it is.) and part relational (God made the world for life; that life includes humanity).  The second story tries to explain the human predicament; why we can imagine an Eden but never live in it.  It isn't science; it's narrative (and don't call it "myth," that's a word with specific meaning in anthropology and literature, but not the one you learned in elementary school).  Genesis doesn't really explain the origin of human life; it helps give an answer to the question Tolstoy asked, instead:  "How should we then live?"

Funny, too, there's almost nothing about people surviving their own death in the Hebrew Scriptures, and less in the New Testament.  The closest Jesus gets is to describe God as the God of the living and the dead, which doesn't deny the boundary between the two.  John's Jesus does describe a house of many mansions where we (at least the good Christians, John's being a fairly exclusionary gospel) will end up, but that's about as definitive as the story of Lazarus and Dives (a description of heaven that's always seemed rather hellish to me).  Yes, Christianity teaches, in various churches and ways, about the afterlife, about God's judgment,  about prayer.  But the biggest error Christians make (IMHO) is to identify God with a cosmic slot machine:  pull the prayer level often enough, and you'll win the jackpot; or God as cosmic scales, and will you balance them?  It is science in the sense of "how should be live?" (which is the only real question of the classic text on these matters, the morality play "Everyman"), but not science in the sense of "what gasses is the atmosphere composed of?".

Dworkin tries to distinguish his argument from saying the beliefs he identifies are "mere science," but the very idea is already off kilter too far to save.  This, however, is where it gets interesting:

I am not arguing, against the science of the traditional Abrahamic religions, that there is no personal god who made the heavens and loves its creatures. I claim only that such a god’s existence cannot in itself make a difference to the truth of any religious values. If a god exists, perhaps he can send people to Heaven or Hell. But he cannot of his own will create right answers to moral questions or instill the universe with a glory it would not otherwise have.

I cannot blame him for thinking the unitary claim of Christianity is that God must be obeyed because God is God.  But I can blame him for not examining that claim and finding out where it comes from, rather than conflating it with religious belief and with all the "traditional Abrahamic religions."  Because the vision of the holy mountain in Isaiah, surely the heart of any Abrahamic claim to universality and validity, is not that God will force the nations (i.e., the non-children of Abraham) to come to the mountain and crook a resistant knee in the direction of the holy throne.  It is that, when Israel fully lives by the covenant, lives as Micah puts it by doing justice, loving mercy, and walking humbly with the God of Abraham, that society will be so peaceful and full and sound, all the nations will want to come to learn from them.  The compulsion will come from the observers, not from the observed, in other words.

Which is, ultimately, why Christian theologians spent so many centuries concerned about the concept of free will.

The problem here is fundamentally epistemological, and Dworkin never addresses it:  in that last quoted paragraph he is assuming discovery, and discounting (by never considering) revelation.  That is a fundamental, I would argue, of a religious attitude:  that knowledge of value (both "of" and "about") comes not from ratiocination or patient peeling back of the covering layers to find the kernel in the seed; but from revelation, from the knowledge being revealed.  This is a distinction in knowledge and understanding Dworkin does not make because, locked into his scientific weltanschaaung as the only possibly valid model of epistemology, he misses the discussion altogether.

Aint' that always the way?