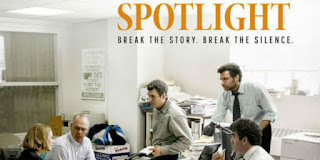 Jesus never discussed doctrine, ideas, arcana, abstractions.  Jesus told stories.  Most Biblical scholars think the ideas, the doctrines, the explanations, came later.  They vary so much from gospel to gospel; there is so little in Mark (the oldest gospel), so much in John (the newest gospel), that the long discussions and discussions and declamations are generally taken as added material, not very original to Jesus of Nazareth at all.

I've been looking for an object lesson in response to the Bernie backers who continue to insist Hillary Clinton hasn't won the Democratic nomination yet (she needs the super delegates votes) and that Bernie should push on to the convention to "get what he wants," because Bernie is not a candidate, Bernie is not even a revolutionary, Bernie is a revolution!

Well, what is a revolution?  I've found an answer, of sorts, in the movie "Spotlight."

Yeah, I'm late to the party.  I tend to go see loud, noisy CGI spectacles involving comic book characters because I've never gotten over the fact I can do that in my late middle age (or have I crossed the Rubicon into "elderly" now?).  I missed this movie the first time around, and I'm very sorry that I did.  But watch it, if you can, on Netflix (or otherwise), and tell me it isn't about a revolution; of sorts, at least.

Turns out the Boston Globe was timely, that the story they first published in 2002 was a story Boston (at least) was ready for.  There were no pickets, no flood of phone calls, when the first story was reported in January of that year.  They went on to write 600 stories, and Cardinal Law had to be removed to Rome.  (That the Church takes care of its own I've never doubted; I've actually envied it, sometimes, although I've never been accused of the scandals the Church faced.  I've seen pastors dismissed merely for dating parishioners of the opposite sex, so my envy is real, if a bit misplaced.)  But the movie makes clear the Globe was up against an institution they had ever reason to fear would crush them, would bury the story (as they had done before), would denounce their allegations from pulpits across Boston, would turn faithful Catholics, and Boston Globe readers, against them.

That it didn't happen doesn't mean the report was not revolutionary.  The reception just meant the people were, as usual, ahead of their "leaders."  But it was a revolution, to take on the Catholic church in Boston, a church with so much power court documents could be removed from public filings, people could be bought off and lawyers face disbarment for admitting any participation in such proceedings, DA's and cops could know that priests caught almost red-handed could be handed away, and the press wouldn't even come calling.

As a character says half-way through the film, if it takes a village to raise a child, it also takes a village to abuse a child.  Exposing that abuse, by the village, to the village, is a more revolutionary act than running for President.  It's also notable that the children most abused were the poor, the invisible, the people America ignores as much as possible.  Poor people don't care about free college tuition; they can't afford the textbooks, the four years unemployed.  Free college is not revolutionary; it's gratuitous.  The Boston Globe revolutionized Boston's relationship to the Church of Rome.  That was a revolution.

Midway through the film (and as in any film like this, singular events stand as symbols for real world attitudes), the people are congratulating themselves for their concern for the poor, for what the Church, through their wealth, does for "the community."  A community that includes silenced and invisible children being abused by priests.  There lies, without mention, the central damning fact of this story:  "Lord, when did we see you?  And why didn't you look like our rich friends?"

The revolutionary act of the Boston Globe Spotlight team was in making the victims of child abuse into human beings, rather than leaving them "cranks" with "an agenda."  It takes the reporters, the editors actually, time to stop treating allegations against the Church as baseless or even malicious nonsense, and start treating it as grounded in reality.  The information is there, has always been there, from victim's statements to the voice on the phone of the priest/psychotherapist/scholar who provides numbers to verify (!) the wails of the victims no one will hear.  How much of this story, as told in the film, turns on those numbers making the human stories something that can finally be listened to, would be a study in itself.

The revolution is in the heart; when we start taking human beings seriously as human beings, when we start listening to their stories, and hearing what we not only don't want to hear, but couldn't hear at all; what we refused to hear.  After all, they were poor; they were outsiders and "cranks" and "had an agenda," and we, the worldly-wise, knew better than to listen.

Sanders isn't leading a revolution.  He doesn't want to change hearts and minds.  He wants to return to a time when we subsidized college tuition (fine), but his only other significant offer is to bring single-payer to the fore.  Considering that couldn't get passed the first time we seriously considered it, and that Obamacare has been battered and beaten by the Supreme Court since, how single-payer is going to happen is anybody's guess, but revolutionary, it isn't.  Revolutionary is changing hearts and minds; is getting in front of the parade and leading it.  Even the vaunted "Founding Fathers" couldn't have succeeded in their political revolution had the colonists not been behind them, not been there already and waiting for their leaders to catch up.