"A real story millions of people refuse to believe" 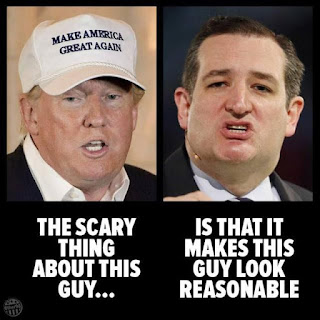 Some people say Ted Cruz actually looks respectable now, because of his speech last night and his appearance before the Texas GOP delegation this morning.

And I say that for the same reason I thought Bernie Sanders supporters screaming about the "rigged" Democratic primary process were full of it, too.

Cruz wants to put himself above everything, even the party.  Nice position if you can get it, but what do you do from that lofty position?  Tell everyone else what to do and to snap to it, because you are alone in the catbird seat?

No one is alone in a system of power, or even in human society.  If Ted Cruz wants to be in charge all on his own, let him go to a desert island and be virtuous by himself.  If he wants other people to put him in the Oval Office, he has to respect other people.

Last night and this morning, Ted Cruz showed that he only respects himself.

I agree with him, that I wouldn't make common cause with a man who insulted my wife and father the way Donald Trump insulated Cruz's family members.  But the solution to that is to decline to speak at the GOP convention.  A lot of people didn't even show up; Cruz could have been one of them.  But Cruz had to show up and make it all about him.  And even this morning, as he wants the party to nominate him in 2020 (his ambition is so naked it's ugly), he wants to stand apart from the party as a paragon of virtue who doesn't need the party to certify his sanctity; he is self-sanctifying (and, some Texans think, more than a little self-righteous).

Not unlike, actually, an itinerant evangelical preacher who never has to minister to a congregation, but just has to rouse a crowd to answer the alter call before moving on to the next revival tent.

No, I don't think Ted Cruz is showing any integrity just now, and I'm more than a bit disappointed in the people who think he is.  Then again, I grew up around this kind of snake oil sales; I'm practically immunized against it.  Ted Cruz isn't a Byronic hero standing up against even the Fates in a noble gesture.

Ted Cruz is Marjoe, fleecing the rubes one more time.