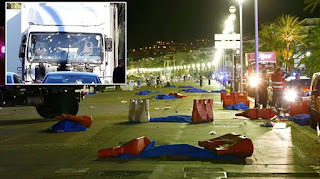 We are all French today, but are all mass murderers "radical Islamic terrorists" (I'm not sure those words aren't copyrighted, actually)?

“He was not a Muslim, he was a s***. He beat his wife, my cousin, he was a nasty piece of work,” Bouhel’s relative told the Daily Mail. “Bouhlel was not religious. He did not go to the mosque, he did not pray, he did not observe Ramadan. He drank alcohol, ate pork and took drugs. This is all forbidden under Islam,” Walid Hamou, a cousin of Bouhlel’s wife said.

"The attacker, who worked as chauffeur and truck driver, was convicted on assault-related charges earlier this year and the mayor of Nice told CNN that last he showed “signs of radicalization.” However, national authorities claim that Bouhlel was completely unknown to intelligence officials and that initial investigations have found no record that he had been radicalized in any way."

So:  was this an act of terrorism, or just an act of violence that, in America, probably would have involved an arsenal of guns rather than a large truck?  Especially since there's this:

"No group has yet claimed responsibility for the attack."

Not to say ISIS/Daesh may want to; but should we let them?