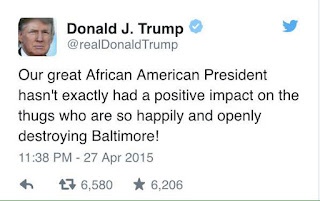 "Racist" still means "beyond the pale."  It means skinheads, neo-Nazis, KKK'ers; you know, the "hardcore" white supremacists who are undeniably "racist."

Is Donald Trump a racist?  He says racist things, he's supported by racists; but he's the candidate of a major political party.  He's not George Wallace, running on a third-party ticket, or David Duke, a KKK member.  So he can't be a racist; right?

Why is Donald Trump the presidential nominee of a major political party? As that famous Simpson's line put it about Fox News, Not Racist but #1 Among Racists! The KKK and "white nationalists" say they feel like the tide is turning in their direction for the first time in decades. Perhaps in spite of himself, but even so Trump is re-normalizing the old anti-semitism that had seemed entirely written out of acceptable public life in America. Not 'anti-Semitism' as an attack phrase against people who don't support Israel enough. But real anti-Semitism with global Jewish cabals, hook-nosed cartoons, jokes about ovens and all the rest.

Notice that JMM refuses to call this attitude "racism."  He even tries to explain it, if not justify it.  Trump sounds racist "in spite of himself"?  What, he's not really responsible for the words that come out of his mouth because he's Trump?  Because he's the GOP nominee (or soon will be)?

It's racism; pure and simple.  There's nothing else to call it.  JMM doesn't even touch on what led to the riots in '67 and '68; that upheaval, the response to the response to the civil rights movement and desegregation, was far greater than the realization that we are about to be a minority-majority country.

It's bad now; but I've seen worse.  And yes, this is exactly, what racism looks like.  It looks like Donald Trump.