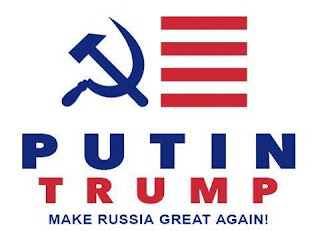 
"Russia, if you're listening, I hope you can find the 33,000 emails that are missing. I think you will probably be rewarded mightily by our press," he said at the presser.

No, really, it's supposed to be funny!

Funniest thing:  the FBI isn't looking for those "missing e-mails":

I should add here that we found no evidence that any of the additional work-related e-mails were intentionally deleted in an effort to conceal them. Our assessment is that, like many e-mail users, Secretary Clinton periodically deleted e-mails or e-mails were purged from the system when devices were changed. Because she was not using a government account—or even a commercial account like Gmail—there was no archiving at all of her e-mails, so it is not surprising that we discovered e-mails that were not on Secretary Clinton’s system in 2014, when she produced the 30,000 e-mails to the State Department.

It could also be that some of the additional work-related e-mails we recovered were among those deleted as “personal” by Secretary Clinton’s lawyers when they reviewed and sorted her e-mails for production in 2014.

The lawyers doing the sorting for Secretary Clinton in 2014 did not individually read the content of all of her e-mails, as we did for those available to us; instead, they relied on header information and used search terms to try to find all work-related e-mails among the reportedly more than 60,000 total e-mails remaining on Secretary Clinton’s personal system in 2014. It is highly likely their search terms missed some work-related e-mails, and that we later found them, for example, in the mailboxes of other officials or in the slack space of a server.

It is also likely that there are other work-related e-mails that they did not produce to State and that we did not find elsewhere, and that are now gone because they deleted all e-mails they did not return to State, and the lawyers cleaned their devices in such a way as to preclude complete forensic recovery.

We have conducted interviews and done technical examination to attempt to understand how that sorting was done by her attorneys. Although we do not have complete visibility because we are not able to fully reconstruct the electronic record of that sorting, we believe our investigation has been sufficient to give us reasonable confidence there was no intentional misconduct in connection with that sorting effort.


Nowhere in Comey's statement does he mention "33, 000 e-mails," missing or otherwise.  He does use the category of "work related e-mails," but I don't think even Trump imagines the e-mails about Chelsea's wedding involved national security.  There were some 30, 000 missing at one point, but, as Comey says, the FBI recovered almost all of those.  Trump decided that number wasn't big enough, so he inflated it.  But, of course, that inflated number is already becoming a "thing":

Since Hillary promised us she only deleted 33,000 personal emails how can it be a national security issue if someone releases them?
— Newt Gingrich (@newtgingrich) July 27, 2016

Truth is getting its boots one while a lie is already half-way around the world.

If Russia or any other country or person has Hillary Clinton's 33,000 illegally deleted emails, perhaps they should share them with the FBI!
— Donald J. Trump (@realDonaldTrump) July 27, 2016

See?  Is joke!  Because the e-mails were deleted "illegally" (No, they weren't; even Comey wasn't upset about the deletions.) .  But hey, he's only a candidate for President, pay no attention!