In anticipation of the Republican National Convention 2016 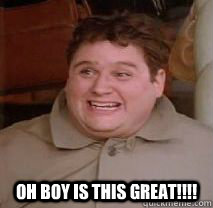 Nobody really knows who's going to speak or what they're going to say (Benghazi?  Monica?  Watergate?  Was Tim Tebow's slot a baseless rumor?  Or the incompetence of the Trump Campaign?).  But we had a preview, and it looks like it's gonna be ugly:

Yes, that was the music playing as Trump came out to make his VP announcement.  And then, according to Ezra Klein, it got weird:

What started as farce continued as farce. Trump emerged without Pence. He spoke, alone, at a podium adorned with Trump’s name, but not Pence’s. And then Trump proceeded to talk about himself for 28 minutes. There is no other way to say this than to say it: it was the single most bizarre, impulsive, narcissistic performance I have ever seen from a major politician.


At this point Klein is right:  you just have to follow the link and watch the video for yourself.

It was all about Trump, and then the closing:

When Trump finally stuck to Pence, at the end of his lengthy speech, he seemed robotic, bored, restless. He recited Pence’s accomplishment like he was reading his Wikipedia page for the first time, inserting little snippets of meta-commentary and quick jabs as if to keep himself interested.

The final humiliation was yet to come: Trump introduced Pence and then immediately, unusually, walked off the stage, leaving Pence alone at the podium.

As Ezra says, Trump is not running for the host of "America:  The Show."  But if this is any indication, four nights in Cleveland is going to be an epic garbage fire that concludes with a massive train wreck.  It's going to be so bad it'll be hard to look away.  I already predict it will lead to cries for Clint Eastwood to return, because all is forgiven.

By the fourth night I expect the convention hall to be empty except for Trump and the clean-up crews.  This is going to be epically bad.  Because this is the man the GOP is proposing be the leader of the Free World:

"So many friends in Turkey," Trump said. "Great people, amazing people. We wish them well. A lot of anguish last night, but hopefully it will all work out."

Yeah, I know they've already dropped this logo.  I'm keeping it, though.