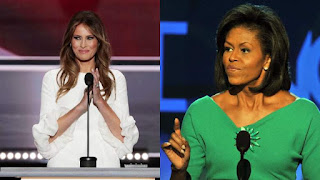 pla·gia·rism
noun
noun: plagiarism; plural noun: plagiarisms
the practice of taking someone else's work or ideas and passing them off as one's own.
synonyms: copying, infringement of copyright, piracy, theft, stealing;

Matt Lauer, co-host of NBC's "Today," asked Christie if he could "make a case for plagiarism."

"No, not when 93 percent of the speech is completely different than Michelle Obama’s speech. And they expressed some common thoughts," Christie said in response before pivoting to say that the first day of a convention is typically the worst day.


During a televised panel event in Cleveland Tuesday morning hosted by The Atlantic, Trump adviser Kellyanne Conway, a prominent GOP pollster, told the audience that just "about 7 percent" of Melania's speech was from Obama's.

As long as you steal only 7% or less of another person's property, it isn't really theft.

In other news, Republicans now aver you can, in fact, be only "a little bit pregnant."