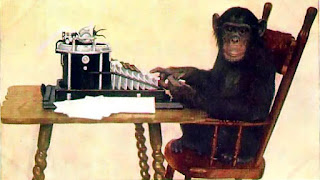 “What is true: Did the language, did a portion of the language of that speech come from Michelle Obama’s speech, yes or no?”

“As far as we're concerned, there are similar words that were used,” Manafort said. “We've said that. But the feelings of those words, and the commonalty of those words do not create a situation which we feel we have to agree with you. You want to have that opinion, fine.”

“It is not an opinion. That's the problem,” Cuomo replied.


Apparently the campaign thinks Melania Trump is a monkey.**

*The link to Wikipedia is to give us this sterling quote:

If there were as many monkeys as there are atoms in the observable universe typing extremely fast for trillions of times the life of the universe, the probability of the monkeys replicating even a single page of Shakespeare is unfathomably minute.

So, yeah, it could happen; but no, really, it couldn't.  Trump bends the laws of the physical universe because, like Bugs Bunny, he never studied law.

**And yes, the refusal to let this go does give us insight into how Trump would ("shudder") govern:

“When faced with something that you did wrong, you just deny it, no matter whether it is true or not,” Cuomo said. “Whether it is the man who has a developmental disability who works for The New York Times, and Donald Trump mocks him and says, ‘No, I didn't.’ Whether it is a star that represents the star of David, and you say, ‘No, it is a sheriff's star.’ There is a pattern, whether it is Baron, John Miller, really Donald Trump. There is a pattern of denying the obvious. What happens when you're running the government of the United States and you don't want to deal with what happens then? That's the concern.”

At least it's out there for people to see.