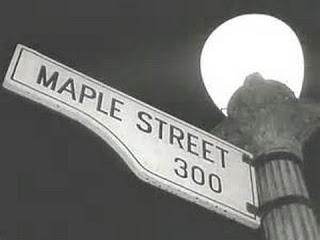 By the sign, you know what time it is.


In my never-ending pursuit of movies long after everyone else has seen them, I'm watching "The Big Short" on Netflix.  And the one-sentence summary of the film is:  "The system is clueless."

Why did Donald Trump win the GOP nomination for President?

The system is clueless.

In the same way that mortgage bonds got built on a very bad idea (treating mortgages as investments in themselves) and eventually metastasized into what Margot Robbie in a bubble bath sipping champagne (I love this movie!) calls "shit," so did the GOP trust the system to keep it's "base" angry but controlled at the same time.  But just as the movie shows how bad the housing market was down at the level of, you know, houses and homeowners (houses "underwater" before that became a term, owners defaulting on mortgages because the properties were investments, not their homes, strippers owning five houses and a condo because loans were being written and bought up by banks the way as if they were children in a candy factory), so too the powers that be were clueless about what they had stirred up and eventually set loose, when they got Trump, the man whose name Mitch McConnell and Paul Ryan and almost no one in the GOP power structure will mention in Cleveland.

And Trump is, to draw in an even older movie, "Bulworth."

Of course, Warren Beatty's character was a politician who got tired of lying, and found out telling the truth was liberating.  Trump wouldn't know the truth if it walked up and shook his hand.  Trump isn't telling the truth; he's telling people what they want to hear.  And the truth of that is in the NYT article that claimed Trump Jr. told Kasich's people Kasich could run the country, The Donald would "make America great again."

Is it true this happened?  Slate says take it with a grain of salt, it comes from the Kasich camp.   Okay, fine, but ask yourself this:  if it was any other candidate, be it Clinton, Sanders, even Huckabee or Santorum, would the NYT print it?  Would anybody believe it, even for a moment?*

People imagine Trump is Bulworth, and they think his insane statements are "truth" or some equivalent thereof.  Well, the few thousand people in the Quicken Loans arena in Cleveland right now do.  Trump is the AAA rated mortgage bond that has been rated by Standard and Poors (the GOP) because if they don't rate it, someone else will; not because he deserves that rating.  In fact, he points up the fraud of political parties the way S&P is revealed to be engaging in fraud in "The Big Short":  because it's all about appearance and staying in business, and the GOP can't stay in business if they can't run a candidate for POTUS.  Because, honestly, what did Ted Cruz say that Paul Ryan didn't say?  It was the same pitch:  "vote Republican, because it's better than voting for Hillary (even though she's going to win, and we all know it)."

The system is clueless.  The system will trade in shit, and call it a sandwich.  As Howard Beale said:  "Woe is us!"

But even Howard Beale couldn't beat the system.  He couldn't even slow it down.

*perhaps more frighteningly:  what difference does it make, to anyone?  "Three Days of the Condor" traded on the notion that the U.S. would do anything, even provoke war, for oil, and the people responsible would kill to keep that a secret.  It ends with Robert Redford submitting that secret to the press, and Cliff Robertson asking him if the press will print it.   30 years later we know that even if they did, nothing would really change.  40 years later, we don't even notice that the candidate for a major party may have no interest in being President at all.  It's not even a secret; it doesn't mean as much as whether or not a Senator endorsed the candidate at the Convention.