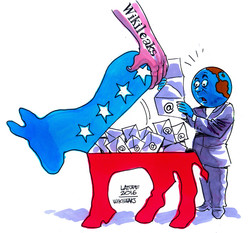 If I'm reading somebody else's e-mails, should I be shocked?  Or ashamed of myself?

The funny part about the Wikileaks e-mail dump is how many people on NPR this morning were all "Whuuut?" about the connection between Wikileaks and Russia.*

It turns out there’s hardly any mystery there. It’s no secret that the DNC was recently subject to a major hack, one which independent cybersecurity experts easily assessed as being the work of Russian intelligence through previously known cut-outs. One of them, called COZY BEAR or APT 29, has used spear-phishing to gain illegal access to many private networks in the West, as well as the White House, the State Department, and the Joint Chiefs of Staff last year. Another hacking group involved in the attack on the DNC, called FANCY BEAR or APT 28, is a well-known Russian front, as I’ve previously profiled.

These bears didn’t make much efforts to hide their DNC hack—in one case leaving behind a Russian name in Cyrillic as a signature—and Kremlin attribution has been confirmed by independent analysis by a second cybersecurity firm.

The answer then is simple: Russian hackers working for the Kremlin cyber-pilfered the DNC then passed the purloined data, including thousands of unflattering emails, to Wikileaks, which has shown them to the world.

Although Wikileaks' posting of the emails Friday did not disclose the identity of who provided the private material, those knowledgeable about the breach said last month that Russian hackers had penetrated the DNC computer system. At the time, DNC Chairwoman Debbie Wasserman Schultz said the breach was a "serious incident" and a private contractor hired to sweep the organization's network had "moved as quickly as possible to kick out the intruders and secure our network."

On Sunday, Clinton campaign manager Robby Mook told CNN's "State of the Union" that he believes Russian hackers are behind the disclosure, and they did it to benefit Donald Trump.

And why in the world would the Russians want to benefit Trump?  Probably because Trump's major source of financing since the 1980's has been from Russia; among other ties.  And besides, there's Trump's statements about what he'd do as President:

...Trump seems really, really focused on a series of issues of great concern to Putin: the level of US involvement in Ukraine, the robustness of our security commitment to the Baltic NATO member states, the continued existence of the EU, the continued existence of NATO. For me, the notorious New York Times interview was a key thing. It showed a presidential candidate not only threatening to blow up a highly successful security framework which has served the United States, Europe and actually the world extremely well over almost 70 years. He showed the kind of swaggering, confusion and uncertainty generating talk which is probably the most likely path to a true super power confrontation in Eastern Europe which probably wouldn't lead to a nuclear exchange ... but, well, might.

Whenever we are looking for undue influence or malign alliances, we are always trying to unearth the quid quo pro. Quids are a dime a dozen. You seldom find the quos. With Trump and Russia we're overflowing with quos and as Trump might say the best quos. We definitely do not know if they're connected. But what Trump is giving is exactly what Putin would want for his help. This is really indisputable.


6. Over the course of the last year, Putin has aligned all Russian state controlled media behind Trump. As Frank Foer explains here, this fits a pattern with how Putin has sought to prop up rightist/nationalist politicians across Europe, often with direct or covert infusions of money. In some cases this is because they support Russia-backed policies; in others it is simply because they sow discord in Western aligned states. Of course, Trump has repeatedly praised Putin, not only in the abstract but often for the authoritarian policies and patterns of government which have most soured his reputation around the world.


Is Trump being backed by Putin?  Is Putin putting his thumb on the scales of the American election? If that's too bizarre a question, too much like the kind of question jingoistic racists might ask about Chinese influence on Democratic candidates or something, then simply consider the above and ask:  Cui bono?

Who benefits?  That the Russians hacked the DNC servers is almost beyond purview (although JMM thinks it might not be).  John Schindler thinks it is beyond doubting, as he thinks there is no question Wikileaks is a cat's paw for Putin (he makes a good case for that, too.).

Does it matter, though?  Wikileaks has released 27,286 e-mails which date from January 2015 to March 25, 2016.  (The hack of the DNC server was reported, if you were wondering, on June 14, 2016.  The DNC reported it has blocked the hackers as of the June 11-12, 2016.)  Of those e-mails, all the discussion is about less than 30.  A list of what can be found there has been posted (accuracy not verified, btw), and it's a fairly tedious list, indeed, including blockbusters like "Consultant calling megyn kelly a bimbo. Has PDF attached that says the same" and DNC telling each other, “I love you too. no homo.” (Frankly, I'm surprised that one isn't getting more play.)  What it proves, so far, is that only idiots commit their thoughts to e-mail; and that maybe the DNC should clear their servers a bit more often, and make sure they actually have deleted what is supposed to be deleted (one never know, do one?).

Wikileaks has promised 3 more batches of e-mails, so we'll have more tedium to come.

But I'm still wondering:  what does Russia have to do with this?  And when will that question be taken seriously?**

*And yes, Wikileaks has problems on more fronts than simply probable ties to Putin.  Well, that, and this:

The use of Wikileaks as the publishing platform served to legitimize the information dump, which also contains a large amount of personal information related to democratic donors such as social security and credit card numbers. This suggests that Wikileaks didn’t perform a thorough analysis of the documents before they released them, or simply didn’t care.

The author of that article argues Wikileaks has been "weaponized" by Putin; and I think it's a fairly well grounded argument.  Still, it's an area in which few of us have a narrative to guide us, so like the critics of Josh Marshall's thesis connecting Trump to Putin, the first response is to nit-pick about any information you think you can get hold of.  I'm not saying the connection is crystal clear; I'm saying a lot of serious questions need to be raised.  And I think the political press would prefer to leave them undisturbed until, oh, February or so.

Kind of like we did with Watergate, although I'm not so sure President Trump could be forced out of office quite the way Nixon went.

**And no, it won't start with this.  Then again, it went from "Whaaa?" this morning to two stories on NPR this afternoon.  So hope springs eternal.
Posted by Rmj at 3:26 PM