So, here's the thing 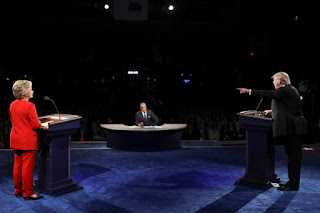 “On tax, where she did I think surprise him a little bit, [he should] point out ‘look, I’m 70-years-old. I’ve paid a lot of tax over the last 50 years.’ Deal with it, brush it off, spend five seconds on it. And on the racism point, and there’s no doubt she will come back to this again and again and again… I think the way you deal with being called racist when you’re not is just to say ‘look, you know, the only people that say I’m racist are those who aren’t prepared to confront the immigration issue’ and then move on to your territory… Don’t let her [Clinton] dictate the agenda. Frankly, ignore her criticisms and speak to a bigger audience.”

If Trump were capable of doing that, he wouldn't have spent the past week making Alicia Machado a household name.

He's not capable of it.  If Clinton needles him, he's going to respond.  Find a tape of the moment she broached this subject in the debate:  Trump interrupted three times, in rapid succession, with the same question:  "Where did you get that?"

He was rattled the moment Machado's name was mentioned.  He's been rattled ever since.

Farage has crossed the Pond to play Henry Higgins to Trump's Eliza Doolittle, but he only has a week to change 70 years of behavior and character.  Besides, Trump has already promised to go after Clinton's marital history; “She’s nasty, but I can be nastier than she ever can be," he told the New York Times.

This is what Farage is up against:

But on Saturday, Trump told thousands of supporters that Clinton’s handling of classified emails and destroying of 33,000 emails that she had deemed of a personal nature meant that “she should be in prison, let me tell you.”

Trump did not stop there. He said he did not believe Clinton would be loyal to her supporters and chuckled, “I don’t even think she’s loyal to Bill, to tell you the truth. And why should she be, right? Why should she be?”

I wonder if he's given up and gone back to England yet?

(and this morning the NYT reports Trump didn't pay taxes for almost two decades because of massive losses in 1995 on his New Jersey casino.  Can you imagine how much fun Hillary is going to have with a business "genius" who runs a casino into the ground?  The next debate is going to be a bear-baiting contest.)