Giant of the Senate 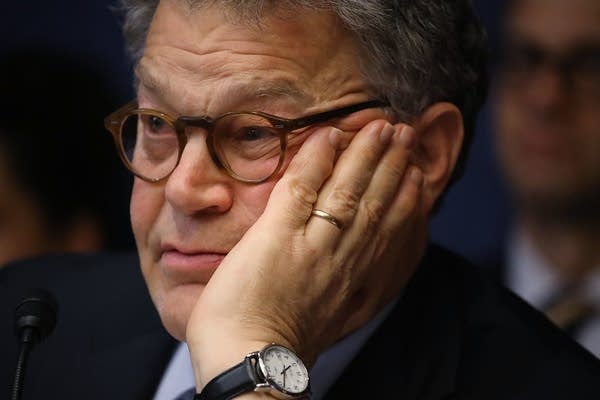 I'm not going to defend this:

“We posed for the shot. He immediately put his hand on my waist, grabbing a handful of flesh. I froze. Then he squeezed. At least twice,” Dupuy said.

“It was also quick; he knew exactly what he was doing,” she said. “He wanted to cop a feel and he demonstrated he didn’t need my permission.”

Dupuy is one of numerous women who have accused Franken of sexual misconduct, both before and after he was elected to the Senate in 2008.


But I am going to question this:

Dupuy said she “assumed Franken would step down” later the same day that Tweeden accused him of misconduct, and said Tweeden’s story “rang true” to her.


Huh?  You only need to accuse Franken because he holds public office?  If he didn't, it wouldn't matter?  And getting rid of him improves the Senate how, exactly?  Are we better off if the entire Congress is forced to follow the Pence rule?  Because that's the only alternative to a guy who gets "handsy" and must be expelled because of it.

If we can't allow people like Franken to be in the Senate, who do we leave there?  Or do we just walk away from this in a few months, satisfied that all the witches have been hunted out?  Because the problem is becoming less and less what Al Franken did, and more and more what is supposed to be done about it.


Sexual harassment is unacceptable. This morning I spoke with Senator Franken and, as you know, he will be making an announcement about his future tomorrow morning. I am confident he will make the right decision.
— Amy Klobuchar (@amyklobuchar) December 6, 2017

Yeah, that doesn't make me feel any better about it.  "Zero tolerance" is a policy that levels everyone and raises up no one.  It's also a conveniently knee-jerk reaction that doesn't serve justice, only vengeance.  And it seems to me the question of whether Sen. Franken continues to represent the people of Minnesota is up to the people of Minnesota, especially absent a Senate ethics investigation finding that he isn't fit to serve in the Senate.

Well, at least we know the few Democrats left in the Senate will be pure, right?