Behold the Power of the Internet! 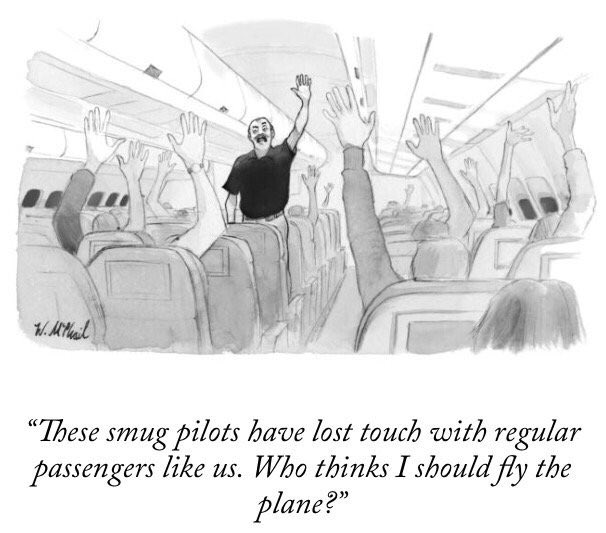 Congress is in recess, yet it's Easter Monday morning (as I write) and why hasn't Trump been impeached?!  Lawyers spend years in law school, and years more in private practice just learning how to be competent in the courtroom, and yet non-lawyers are experts on criminal law and constitutional law and understand the legal underpinnings of the Mueller report better than the lawyers and law enforcement agents who wrote it to.  (or, if you're Glenn Greenwald, you understand it without obviously having read a word of it!).

Everyone else is sheeple but me and thee, and I'm not so sure about thee!

I understand the frustration prompted by the DOJ regulation that a sitting President cannot be indicted, but to allow a President to be indicted and found guilty after a criminal trial sets up an interesting conflict:  he's still the President.  Not that we haven't elected convicted felons to public office before, we've just never had a sitting President who is also a convicted felon in the White House.  Now would begin the proceedings to impeach, I suppose.  Except how long would it take to get a President into court?  What barriers to prosecution could the President erect?  Trump is already suing to block access to his business records, on no firmer ground than that Democrats are “singularly obsessed with finding something they can use to damage the President politically,”  that's not exactly invoking national security, is all I'm sayin'.  It's an argument that shouldn't last long in the courts, but will certainly take time to get to the Supremes, even if they summarily reject it.  You think a criminal prosecution is going to move faster?*

Say it moves as quickly as the OJ Simpson trial (I can find dates for it, that's all).  The murder occurred on June 12, 1994.  The jury was sworn in on November 9, 1994.  Trial began January 24, 1995, the verdict announced October 3, 1995.  So, what, 16 months from crime to verdict?  How long would it take, first, to find a venue "fair" to the President (D.C. is not exactly GOP country), and to empanel a jury unfamiliar enough with the facts of the case to be considered fair and impartial?  And then the trial begins, when?  Let's follow the OJ timeline and guess it would begin 7 months after the crime, or in this case, the release of the Mueller report.  Okay, now we're into November, 2019.  How long can the criminal trial proceed?  Who runs the government while the President is sitting in the dock?  Does he sit in the dock?  Why?  Why not?    Maybe the President should resign, but what if he's not inclined to?  Can the trial reasonably take 9 months?  What is in the interests of justice?  What is fair to the prosecution, the defense, and the nation?

So, sometime in August 2020, about the time of the national political conventions, we have the end of the trial.  And a verdict?  What if that comes in September?  Does Congress move immediately to impeach?  Does anybody see that happening?  And in all this time, does government effectively grind to a halt for the proceedings?  Or does the President issue vetoes, and sign legislation, and travel to foreign countries, and respond to national emergencies, visit disaster areas, attend state dinners, attend meetings of international importance, while he is on trial for felony offenses?

And that timeline is predicated on the notion the President doesn't raise a Constitutional challenge to the proceedings, on the simple grounds that impeachment is the only proper remedy for a President who has committed "high crimes and misdemeanors."  So this timeline is wildly optimistic.

Precisely how does this benefit the country?  Isn't that why we're doing this?  For the good of the country?  Or because we despise the current POTUS?

I despise Donald Trump.  I want to see him out of office instanter.  But is he a permanent disaster for the democratic republic?  Depends; is this a government of men, or of laws?  Law is a blunt instrument, and not always the swift, sure sword of justice Hollywood and TV have told us it is (I watch Perry Mason reruns daily, now.  I'm amused at how simplistic and simpleminded it is about the justice system, and what "justice" is.)  If we are just a government of men, then William Barr has won, and the supremacy of the executive is assured.  Except if we are just a government of men, William Barr (who himself should be impeached immediately, on grounds obvious to anyone who's been watching the news for even five minutes) will be replaced within 24 months, and his ideas, which have never become law, will pass away with his tenure.

Or they won't; it's really up to us.  It's a government of laws, but it's operated by human beings.  How it functions, what "traditions" we uphold and adhere to, is really up to us.  We elect clowns on a local level and, every four years, elect one altogether as a nation on the national level.  It really is a representative government; and that's the problem.

It can also be the solution.  But it's pretty much the only solution we have.  Well, that and the courts, as the Mueller report recognized:**

On the very first page of the report’s second volume, Mueller provided an answer. He wrote, “while the OLC opinion concludes that a sitting president may not be prosecuted, it recognizes that a president does not have immunity after he leaves office.” He repeated this again in a footnote at the end of the report that it would “serve the usual purposes of the criminal law” to prosecute a president after he has left office.

That footnote is getting even more attention.  It's a fair argument, because impeachment is a political act, and no President has ever been removed from office by it (Nixon resigned so Ford could pardon him.).  And it won't happen now, either.  High-minded arguments about "accountability" are just so much eyewash, IMNSHO.  And indictment without a trial, or where the trial is a foregone conclusion (i.e., the prosecution loses) reflects on the accountability of the system and the prosecution, not the defendant.

*aside from the problems of the political questions, which should not be raised in any criminal prosecution.  That subject is very well examined here, and I leave that discussion to that article.

**which is why I agree with Norm Ornstein's proposal to hold hearings in Congress, especially because the iceberg of this situation is the counter-intelligence probe Mueller conducted, and that Congress REALLY needs to see.


One of the most remarkable things about the last couple years is we have been given no indication that Trump’s re-election campaign will hesitate to take advantage of Russian help again, in whatever form it might take. https://t.co/TNG2Zvcmfx
— Dustin Volz (@dnvolz) April 21, 2019

The Mueller report is also notably silent, Avlon argues, on the “Trump-Moscow money trail” and whether Trump’s business dealings have left him open to being compromised by Russian intelligence.

That way lies accountability, not in the courts, but at the ballot box.  And after the November results, the courts; one does not preclude the other.