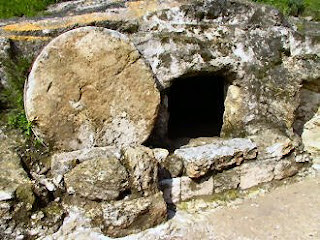 The last words of the gospel of Mark are, as I mentioned this year, an ending more in line with "Jesus Christ Superstar," oddly enough (I'm writing this on Easter Saturday.  My stereo is set up to make the house a giant set of headphones, and I have the place to me self.  Three guesses what is blaring from the speakers, first two don't count.)  That Easter story is a personal favorite because it is the earliest version of the Easter story we have in the canon; and because it ends in the garden.  My favorite translation catches the intensity of the narrative as well as any in English:

And when the sabbath day was over, Mary of Magdala and Mary the mother of James and Salome bought spices so they could go and embalm him. And very early on the first day of the week they got to the tomb just as the sun was coming up. And they had been asking themselves, "Who will help us roll the stone away from the opening of the tomb?" Then they look up and discover that the stone has been rolled away! (For in fact the stone was very large.)And when they went into the tomb, they saw a young man sitting on the right, wearing a white robe, and they grew apprehensive.  He says to them, "Don't be alarmed! You are looking for Jesus the Nazarene who was crucified. He was raised, he is not here! Look at the spot where they put him! But go and tell his disciples, including 'Rock,' he is going ahead of you to Galilee! There you will see him, just as he told you."And once they got outside, they ran away from the tomb, because great fear and excitement got the better of them. And they didn't breathe a word of it to anyone: talk about terrified. . .(Mark 16:1-8, SV)


Which is, let's face it, pretty much how we would all feel.  Sorrow, terror, and joy, in one passage; that is worth reflecting on, and even rejoicing over.

And over and over again.