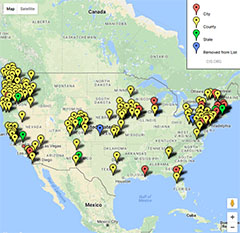 I need to finish it:

“The city would be prepared to welcome these immigrants just as we have embraced our immigrant communities for decades,” Philadelphia Mayor Jim Kenney told The Daily Beast in a statement. “This White House plan demonstrates the utter contempt that the Trump administration has for basic human dignity and the core values on which this nation was founded.”

“I am proud that Cambridge is a sanctuary city,” Mayor Marc McGovern of Cambridge, Massachusetts, told The Daily Beast. “Trump is a schoolyard bully who tries to intimidate and threaten people. I’m not intimidated and if asylum seekers find their way to Cambridge, we’ll welcome them.”

“Humans are not pawns. This is not a game. These are people’s lives,” said Portland Mayor Ted Wheeler. “Portland will continue to protect its sanctuary status in accordance with Oregon law and the U.S. Constitution. We strongly denounce the cruel efforts of this administration to retaliate against sanctuary cities.”

Rep. Jamie Raskin, a Democrat who represents Maryland’s Montgomery County, a jurisdiction ICE has called consistently not cooperative, said that the political conditions were actually ripe for negotiations with the White House and congressional Republicans.

“It’s unfortunate that the president is in such a dark and vindictive state of mind. I don’t know where he thinks that leads,” added Raskin. “He’s a day trader. He’ll be off on another idea tomorrow.”


It won't be one about treating humans as humans.  He's incapable of that.