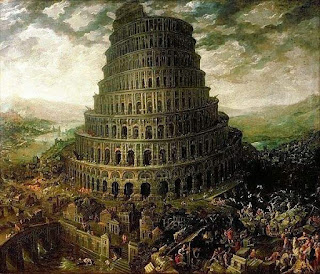 I wrote this a few years ago; since then some parts have faded from public interest (the relationship of "Eostre," the pagan goddess known only to the Venerable Bede, to "Easter"; and the Dawkins Foundation posting a connection between "Easter" (an English word) and "Ishtar," a supposed (I trust nothing!) Babylonian goddess (yeah, somehow a Babylonian word made it's way to English, a language winch didn't exist at the time of Babylon, without going through any other languages first, including Greek or Latin, from which most words of ancient Christian origin come).  The notion of conspiracies, however, is alive and well, and like nuclear physics (per Howland Owl of "Pogo" fame), ain't so new, and it ain't so clear.

What I'm about to quote comes from an an RD article from 2014 that is still available. The fact that it is five years old is what really interests me, because that is a time before our long national nightmare was seen slouching toward Washington to be born.


New Testament scholars have noted that since The DaVinci Code became a cultural phenomenon, there’s been a surge of conspiratorial claims about Jesus, the early church, and the influence of Pagan mystery religions. Authors such as Craig Evans and Bart Ehrman have written with bewilderment at the revival of “mythicist” theories of Jesus and “nineteenth-century philosophical hokum” that was long ago dismissed by serious scholars who read Greek and Hebrew.


"Mythicism" is an idea that didn't mean much to me then, but of which I've become aware now.  Everything old is new again, and again.  As you can see, it has a fairly old pedigree, and it arises from the same source as most conspiracy theories do:  a little knowledge used to paper over the enormous complexities of human history, and especially the great difficulty of getting the facts, not the wild conjectures.  As for these "pagan" roots in Christianity, as I've pointed out over and over again: "It was Protestant Reformers, in fact, who first accused their Catholic rivals of adulterating Christianity with Paganism."  The much maligned Puritans in America are the taproot for this notion in American thought, so much so that most people don't realize they are relying on the arguments of people they disdain when the claim these "pagan" connections somehow "corrupt" Christian practices.

As I said once before (or probably many times before), this "mythicism" (which comes in all shapes and sizes) is of a piece with the worried mother who told me in high school (no, not my mother) that the peace symbols on my sandals (still wish I'd held onto those) were ancient Satanic symbols; when, in fact, it was a symbol created in the 1950's for a British anti-nuclear weapons group.

A little knowledge is still a very dangerous thing.  The poor woman was actually worried that her daughter, seeing my sandals, was going to endanger her immortal soul.  It's no less an anxiety than the internet commenters I read who insist Hillary Clinton is evil.  Sorry, that's the old fear:  now they insist Donald Trump must be removed from office by noon!  Today!  Well, okay, tomorrow!  But MAKE IT HAPPEN OR WE'RE ALL DONE FOR!!!!!!!!!!

I'm a little surprised that Dawkins internet meme about Easter and Ishtar isn't still around.  After all, "Easter" sort of sounds like "Ishtar, and is it really a coincidence that the word "God" in English can be spelled backwards as "dog"?  Hmmmmmmm?

This part seems to be lost from that RD article, but I have it in an old blog post, and it's a handy conclusion to my thoughts on the matter:


That latter, "spewing bile," [still] seems to be all our national political discourse is capable of.  It's almost a religious discourse, with some people saying their vote cannot be tainted by using it to support someone they don't 100% support and agree with [have we learned nothing since 2016?].  They are saying that their vote is holy, and must be kept pure and unscathed.  Which is an interesting argument from people who also insist religion should either disappear, or be kept firmly and rigidly separate from government, even to the extent of how other voters choose whom they will vote for.

Easter, and Eastertide (much longer than Christmastide*), like Christmas, could be a time to reflect on how to change such animosities and even find common values.  But that's what's lost in secular Easter and secular Christmas: the whole point of the original purpose.  It's really not an accident that Eastertide ends with Pentecost, the great reversal of the dispersal of nations at the Tower of Babel.  It's also no accident the world pretty much ignores that occasion (and lesson) altogether.  But because the world ignores it, doesn't mean the rest of us have to.

*We have lost the concept of both, more's the pity.