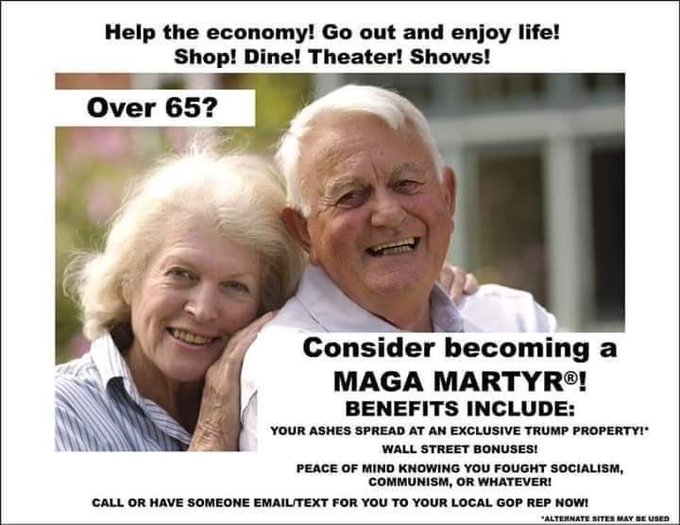 So, let's put this in context:

Calls over a loudspeaker of “Team 700,” the code for when a patient is on the verge of death, come several times a shift. Some have died inside the emergency room while waiting for a bed.

A refrigerated truck has been stationed outside to hold the bodies of the dead. pic.twitter.com/8sjambfs4C
— Phillip Carter (@Carter_PE) March 26, 2020


There's a difference between "movie deaths" and death in real life.

In the movies, people "die," because they fall down and stop moving.  It's usually very clean.

In real life, people die slowly, especially if the cause of death is a disease process.

In the movies, dead bodies just vanish.  Sometimes, via movie magic, they dissolve or turn to dust or are whisked away in tiny fragments by a vagrant breeze.  If not that, then the scene changes and the clean up of bodies is not even necessary:  there is simply no more notice of them.

In real life, people leave corpses behind, which have to be cared for lest they lead to further problems, like cholera.  They are also the corpses of loved ones, and have to be treated as such.

In the movies, people die suddenly and easily, or they die a "beautiful death," and you can even pick who dies (if you're the screenwriter") or see it coming because Act 3 is drawing to a close.

In real life, death is absolutely unpredictable, and attention must be paid.  We don't tell people "You're odds are too low, go home and die, no treatment for you!"  And you don't know who is going to die, who is going to live; unless you simply refuse to treat people.  And then you are playing God, and literally deciding who lives and who dies.  In medical care this is called "triage," and it is invoked only under circumstances where care is limited and must be rationed.  Deciding the "old" should die so the "young" can go back to the movies and bars is not triage; it is brute savagery.  More importantly, it simply doesn't work the way the proponents of "let the old go first" imagine it does.  Because what they are calling for is not the cruel logic of implacable fate ("You're time is up!"), but the horrific illogic that a disease process will "cull the herd" like some kind of invisible hand from economic theory.  But the disease process is arbitrary and cruel and may well take the grandchildren instead of the grandparents.  Assuming we have control of this disease is one more act of hubris from people who imagine they control the fates themselves.

The other, of course, is deciding some lives are more expendable than others.