Does Bedlam have any room left?

As I was saying (via Raw Story):

“I have something I want to say to the victims of Newtown, or any other shooting,” Davis said. “I don’t care if it’s here in Minneapolis or anyplace else. Just because a bad thing happened to you doesn’t mean that you get to put a king in charge of my life. I’m sorry that you suffered a tragedy, but you know what? Deal with it, and don’t force me to lose my liberty, which is a greater tragedy than your loss. I’m sick and tired of seeing these victims trotted out, given rides on Air Force One, hauled into the Senate well, and everyone is just afraid — they’re terrified of these victims.”

“I would stand in front of them and tell them, ‘go to hell,’” he added.


And no, his comments did not go unnoticed, and no, he hasn't apologized:

Davis acknowledged on Monday he was “getting some email” about his comments. But he did not offer an apology. Instead, he dismissed his offensive remarks as “an emotional predecessor to a thought which can and will find a more refined expression by me and others in the future.”


In fact, he went a bit further in "refining" his "expression":

It's critical that people who have suffered a tragedy are able to speak and it's understandable that they would wanna, you know, dedicate their lives to the memory of their children. But it's also critical that our constitutional rights are protected. And here's the point in this: What's really at stake is the insecurity because of the loss of natural rights to defend ourselves from criminals as well as the encroaching power of the state. And it's important to look at the broad ramifications that this legislation might have on liberty and security and refrain from pushing it through by parading around victims or overestimating their credibility in policy preferences just because they're victims. Victims should not be exploited, it does not help them grieve, it does not help us grieve, and it does not advance the cause of liberty. But they are, and so they become public personalities and part of the political arena and so be it and we'll leave it at that.

To take his "argument" seriously, apparently the "cause of liberty" means we have to let people who aren't Bob Davis die, so Bob Davis can be at liberty to own guns.  I wonder if he feels the same way about the liberty to use bombs or otherwise kill people in "terrorist" acts, and if not, why not? 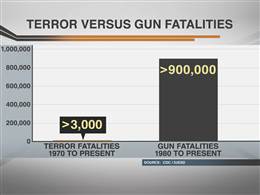 The chart speaks for itself.  We have, in 20 years, lost 300 times as many people to gun violence as we have lost to terrorism in 30 years. And yet, as Chris Hayes pointed out last night, when  the cause of death is terrorism, no cost should be spared to prevent any further deaths, no stone unturned to capture and punish the perpetrators.  But for gun violence?  Well, that's the cost we pay for being a "free society."  Even when that cost is 30,000 times as many fatalities in 43 years.  But Bob Davis thinks we have to pay that price in order to have liberty.

What kind of liberty is this, and is Bob Davis willing to pay it with his family members?

Claire McCaskill gets it:  the only difference between Boston and Sandy Hook is the choice of weapon.  One is a weapon of mass terror; the other simply a weapon of mass death.  We cannot accept bombers at public events who kill 3 people and wound hundreds.  We have to accept a madman who slaughters a school full of children.  We can't even let the families of those children have any impact on the discussion of our public policy.

I'm tempted to say that people who have no real empathy for the suffering of others have no place in society, either.  But that would display a lack of empathy on my part; and what I really mean is, such people have no role to play in our policy making.

Unfortunately, the US Senate yesterday proved me wrong on that, too.