"The eternal struggle of former Presidents to rewrite history.”

The opening of the Bush Library in Dallas has prompted the predictable hagiography of our 43rd President (and there is something weirdly Oedipal about a Presidential Library that prominently features a much-larger than life-size statue of the President standing with his father, also a President.  The Adams family was never as creepy as this:) 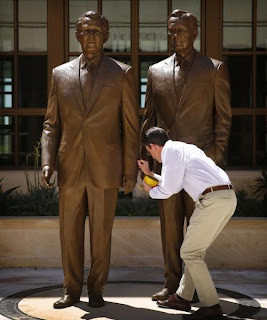 It is a hagiography even Ezra Klein has fallen prey to (sorry, Mr. Klein, but you do get to be President without being smart.  American history is rife with examples.  And just because David Brooks says W. is smarter in private than in public, doesn't make it so.), and that prompts me to add my $0.02 to the collective memory of who George Bush really was:

And not just at the Palace:

And the last time we opened a Presidential Library:

Or was this a wishful paranoid fantasy of ubiquitous terrorism destroying Clinton's legacy with one blow? Or a projection of menace and messianism, with only Bush grasping the true danger, standing between submerged threat and civilisation? Perhaps it was simply his way of saying he wouldn't build his library near water.

And while Bush may wish to look larger-than-life at his own library, this is how he looked at that last library opening: 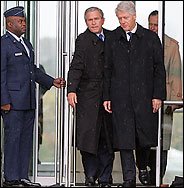 And that's the way I'm always going to remember him.