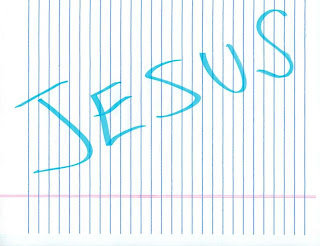 This, by the way, is fascinating.

Write the word "Jesus" on a piece of paper.  Now put that piece of paper on the ground and stomp on it.  Sacrilegious? Blasphemous?  An assault on religion?

Or an exercise in the power of symbolism?

"Jesus," after all, is merely the Anglicization of "Joshuah", based on the transliteration of the Greek

into Latin (Iesu).  And written on a piece of paper, it is just ink on paper; a series of squiggles that means no more than that set of Greek characters, unless you know how to read those characters.  If I wrote the name of "Jesus" in Chinese pictographs, would it be more or less sacrilegious to stomp on the piece of paper?  How about if I used the Greek characters?  When is this disturbing, and why?

Semiology is the study of signs, of signifiers.  It wasn't until I studied semiology that I even noticed that "sign" is a "signifier" (somehow the pronounced consonant in the latter covers, at least to me, the connection between the two ideas).  A "Sign" was always something on a roadway:  it told you to stop, or yield, or what that name of the business is.  To recognize a sign signifies, is to recognize something new; and it is to recognize the importance of symbol.

If I stand in the pulpit in my black Wesleyan robe, it signifies I am a preacher in the Reformed tradition.  (Well, it used to; now it just means I'm a pastor, whatever that signifies.).  If I wear an alb, it should signify my humility and connection with the working class; but if I wore blue jeans and a t-shirt and maybe some work boots into the pulpit, it would signify that connection far too clearly, and few congregations would welcome me.  Most would feel I was not showing them, or their pulpit, the proper respect.  Symbols do matter to us, even when we don't realize they are symbols.

Which is what makes this story so fascinating.  First, it comes from a textbook:


"This exercise is a bit sensitive, but really drives home the point that even though symbols are arbitrary, they take on very strong and emotional meanings. Have the students write the name JESUS in big letters on a piece of paper. Ask the students to stand up and put the paper on the floor in front of them with the name facing up. Ask the students to think about it for a moment. After a brief period of silence, instruct them to step on the paper. Most will hesitate. Ask why they can’t step on the paper. Discuss the importance of symbols in culture."

Now, of course, "stomp" is a charged word.  It is, itself, a signifier, and it signifies disrespect.  But even putting your foot on a piece of paper with a word on it can be disrespectful, so the signifier "stomp" relates the outrage of those passing on this story from this Florida college classroom.  And I've repeated the term here intentionally, because this story is all about outrage and where it comes from. Because the instructor in this case has been put on leave, having faced a number of death threats.   There are even allegations he threatened a student; allegations I find a bit unlikely, but I don't know the instructor, so who knows?    So what is the story here?  That a teacher went atheist-crazy and told his students to "Stomp out Jesus!"?  No.  The instructor was trying to get the students to consider the power of symbols.  He might have drawn a flag on the piece of paper; that would have been no less controversial. It would also raise the same question:  is the drawing of a flag the same thing as a flag?  Is the name "Jesus" the same thing as the central figure in Christianity?  Or, in the terms of semiology:  is the signifier also the signified?

What if you told the students, instead, that it was the name of a Mexican male?  Pronounce the word with the Spanish "J" instead of the English one?  Is that better?  Why, or why not?

My sympathies are with this instructor.  Teaching is hard enough without facing this kind of vitriol.  I won't link to all the hard-right web sites which have brought calumny down on this teacher.  The college, to its credit, is supporting the teacher:

“As with any academic lesson, the exercise was meant to encourage students to view issues from many perspectives, in direct relation with the course objectives,” said Noemi Marin, the university’s director of the school of communication and multimedia studies.

“While at times the topics discussed may be sensitive, a university environment is a venue for such dialogue and debate,” Marin added.

Of course, the takeaway from this story at that link, is this:

The university did not explain why students were only instructed to write the name of Jesus – and not the name of Mohammed or another religious figure.

Even after quoting the language of the proposed assignment I provided above, the article writer insists on missing the point.  "Jesus" is a much more powerful symbol in American culture than "Mohammed."

The real question is, what does "Jesus" symbolize?

Addendum:  I should point out that Sharia law insists you cannot defile the holy Koran in this way (the way described above).  Any Koran, just as any sheet of paper with "Jesus" on it can somehow become holy.  And the Governor of Florida (which is where I really sympathize with the poor teacher) thinks the laws of America (since he speaks as a public official, which means his words carry some weight of law behind them) mean a piece of paper with the letters "J-E-S-U-S" cannot be treated this way, either.