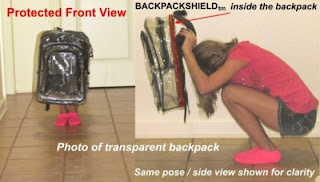 I'm sorry to be so blunt, but this is fucking insane:

The pink bulletproof rucksack that 5-year-old Jaliyah wears to school every day reaches almost down to her knees and weighs 3lbs even when empty, but for her Colorado father, the size and solidity are part of the attraction.

"If you put it on her back, it almost covers her whole body," explains Demitric Boykin. "It was a very hard conversation to have but she knows that it's something that will keep her safe."

Lined with ballistic material that can stop a 9mm bullet travelling at 400 metres per second, the backpack is only one of a clutch of new products making their way into US schools in the wake of Newtown school massacre. As gun control legislation grinds to halt in Washington, a growing number of parents and teachers are taking matters into their own hands.

The Denver company that supplied Jaliyah's rucksack, Elite Sterling Security, has sold over 300 in the last two months and received inquiries from some 2,000 families across the US. It is also in discussion with more than a dozen schools in Colorado about equipping them with ballistic safety vests, a scaled-down version of military uniforms designed to hang in classroom cupboards for children to wear in an emergency.

When I was a child, it as "duck 'n' cover," which was meant to protect us from either a tornado, or nuclear blast.

I wish I were making that up.

One was more likely than the other, and the danger was real, as the classrooms I sat in were basically greenhouses:  two walls on opposite sides were plate glass.  A tornado would have turned the whole school into shrapnel in less time than it takes me to type this sentence.  Duck 'n' cover meant crouching beneath your desk with your hands over the back of your neck.  It was as much protection as could be provided against what was, after all, an Act of God.

Not that it was really much protection at all.

There is nothing either Godly or natural about a shooter entering a school to kill students.  And while the tornado is still more likely (although the schools have, only recently though, been replaced with brick and mortar versions that will withstand the weather much better), telling a child they must carry a bullet-proof backpack to school in order to be safe, is such an abdication of social order and justice I don't know here to start.

As I said, it's just fucking insane.  There are no other words for it.

But this is America, so of course, there's more:

Barry Tull, headteacher of Worcester Preparatory School in rural Maryland, has 80 ballistic shields deployed in his classrooms disguised as whiteboards and clipboards. Some teachers use them to assign homework, others lean them up against the wall, but most of Worcester's middle and high-school children know what they are for.

Keith Olbermann used to call it "security theater:"  the elaborate measures at airports for preventing another 9/11:  more expensive and flashier than real intelligence work, and even less likely to prevent another event (which, like meteor or lightning strikes, were rare before 2001, as well as after).  This is the modern American solution to the problem:  not to use government money to prevent crime, but to waste government money on products that will make us think we will be safe "next time."  Because this is what our teachers need to know:

"The former secret service trainers we had in showed us how they can deploy them; how to hold them in front of their body defensively or use them offensively where the teacher charges at someone with the shield as cover."

‘‘This is not serving to keep children safe,’’ she said. ‘‘This is serving to increase their fear and their suspicion of their peers.’’

At Amendment II in Salt Lake City, sales of its children’s backpacks and armored inserts have increased, with 200 purchase requests Wednesday alone.

Gotta love the name of that Salt Lake city source for these things.  Because in the end, even our children don't matter as much as our guns.