Mostly it's because we don't want them here.... 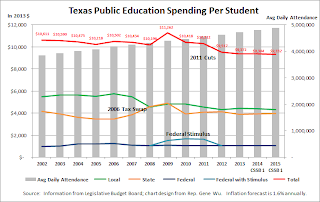 Texas has a history of sending our most obnoxious politicians to Washington.  The latest is Ted Cruz, who is an idiot.

CRUZ: And it will become a bigger and bigger part of the state budget and so if Texas did as some other states are doing and signed on to the expansion of Medicaid, what we would see is Medicaid growing even faster than it is now as a percentage of the state budget and crowding out every other priority. So if you think it’s important for the state to continue spending on public education, you should be glad that the state is not signing on to Medicaid expansion. If you want state funds to provide for our prisons and law enforcement to incarcerate violent criminals and keep them off the streets you should be glad we’re not signing up for this Medicaid expansion because every state that does so is going to be regretting it mightily because the pressure is going to crowd out just about every other priority in the budget.

Let me put it in the simplest way possible:  at least one school district will see state funding for the next two years amount to $19.00 per student.  Yes:  $9.50 per student, per year, for two years.  That's all the state says it can afford.*

And yet Texas won't sign on to Medicaid expansion.

Sen. Ted Cruz is an idiot.  End of discussion.

Update:  Maybe Sen. Cruz needs to talk to Gov. Perry.  If only that were the real Gov. Perry.

*unless the budget currently under consideration in the Lege is radically changed; but you might as well expect the sun to rise in the West tomorrow morning.