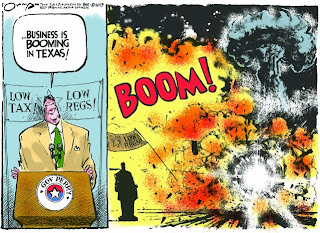 I'll admit it, I'm amused by this.

I keep thinking of Chris Christie visiting the Jersey shore.  I don't remember Rick Perry coming to Houston after Hurricane Ike, although maybe he deigned to visit the Bolivar Peninsula, which was scrubbed clean by that hurricane.  He certainly didn't make the effort to show support for the people of Bolivar Peninsula, or Galveston, or Houston, that Chris Christie showed for the residents of New Jersey.

I can understand those who find the cartoon offensive.  But I've gotta say, I agree with the cartoonist, and the editor of the Sacramento Bee:  Rick Perry offends me quite a bit more.  And he really does put business ahead of people.  He all but brags about it.

What I think he finds most offensive, is that somebody finally noticed.