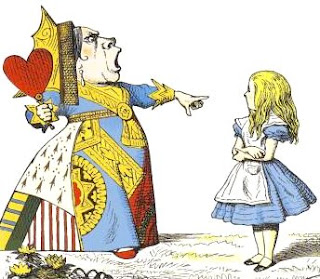 No, no!' said the Queen. 'Sentence first - verdict afterwards.'

"No person shall be held to answer for a capital, or otherwise infamous crime, unless on a presentment or indictment of a grand jury, except in cases arising in the land or naval forces, or in the militia, when in actual service in time of war or public danger; nor shall any person be subject for the same offense to be twice put in jeopardy of life or limb; nor shall be compelled in any criminal case to be a witness against himself, nor be deprived of life, liberty, or property, without due process of law; nor shall private property be taken for public use, without just compensation."

Note it does not say "U.S. Citizen," it says "person."  Sen. Graham likes to imagine we are now ancient Rome, and Roman citizens have privileges that other residents of the Empire don't enjoy.  But since Dzhokhar Tsarnaev is a US citizen, Sen. Graham realizes he's on shaky public ground, so he wants Tsarnaev declared an "enemy combatant" because, well:  ooga booga!

GRAHAM: This man, in my view, should be designated as a potential enemy combatant and we should be allowed to question him for intelligence gathering purposes to find out about future attacks and terrorist organizations that may exist that he has knowledge of, and that evidence cannot be used against him in trial. That evidence is used to protect us as a nation. Any time we question him about his guilt or innocence, he’s entitled to his Miranda rights and a lawyer, but we have the right under our law — I’ve been a military lawyer for 30 years — to gather intelligence from enemy combatants. And a citizen can be an enemy combatant.


Why can't Tsarnaev go to a "military commission"?  Because he's a US citizen, of course.  Otherwise Sen. Graham would demand he be remanded to Gitmo instanter, lest we all be in danger.

Remind me again how dangerous Tsarnaev is compared to the Unabomber; or Timothy McVeigh; or Adam Lanza, who terrorized every school in the country into putting teachers in classrooms with guns, or wondering if they should; or the Aurora shooter; or....

Was it because Tsarnaev used bombs?  He used guns, too.  He's responsible for killing three people with bombs, one with a gun, and his own brother with a car.  Is he a mass murderer?  Or a terrorist?

And why in the name of all that's Constitutional is he a "potential enemy combatant"?  Because he didn't shoot enough people?  What the hell does "potential" mean?  How does that alter Tsarnaev's status before the 5th Amendment?  After all, his crimes were committed here, not against US troops on a foreign battlefield. If they were committed....

Why, again, is Tsarnaev an "enemy combatant," potential or otherwise?  Because the FBI says so? It says he's a suspect in the bombing.  Perhaps the Boston State Police say he's responsible for the death of an MIT police officer, and Tsarnaev's own brother.  But those are surely criminal acts, not acts of terrorism.  So is it now enough that someone somewhere just says you're suspicious, to make you subject to indefinite detention?

Sen. Graham's claim of being a military lawyer reminds me of the comment of my Criminal Law professor, himself also a former JAG:  "Military law is to law as military music is to music."  Sen. Graham proves my professor was right.  And we don't need to be using "military law" as an excuse to eviscerate Constitutional law.  Unless we get to declare Sen. Graham a "potential enemy combatant" because a person so shrill and such a relentless fear-mongerer is a danger to the national well-being.