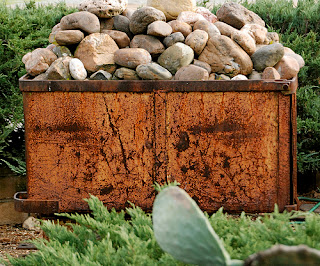 I was going to point out how everything old really is new again, having stumbled across this recent post.  The definition of marriage is back in public discourse, thanks to the ramblings of Ben Carson, who's 15  minutes of fame should be up anytime now. In fact, most of the arguments against gay marriage are back; or, since that post is only 6 months old, they never really went away.  They haven't gotten any more reasonable, either, or, IMHO, defensible.  This, however, does qualify as a new argument:

“You may be as straight as an arrow, and you may have a friend that is as straight as an arrow,” Everhart said. “Say you had a great job with the government where you had this wonderful health plan. I mean, what would prohibit you from saying that you’re gay, and y’all get married and still live as separate, but you get all the benefits? I just see so much abuse in this it’s unreal. I believe a husband and a wife should be a man and a woman, the benefits should be for a man and a woman. There is no way that this is about equality. To me, it’s all about a free ride.”

I had to read that a couple of times before I realized the "free ride" was health care.  Because, you know, this is America, and while you're entitled to life, liberty, and the pursuit of happiness, no way in HELL are you entitled to health care.  Especially just by being married!  I mean, what's next?!  People getting married just so they can have kids?  Or worse, getting married and NOT having kids!  What a sham marriage that would be!

Might have some financial benefits, though; so we'll have to be on the lookout for that.....