In God We Trust. All others pay cash. 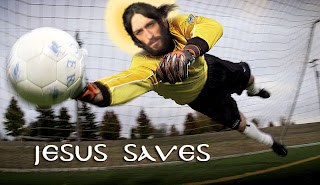 I have my problems with Christian salvation, and so with most theories of soteriology.  Some of my thoughts on this subject are quite technical and almost systematic; some, less so. 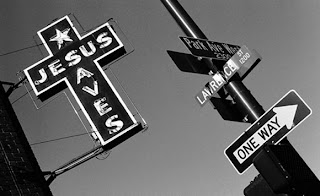 Which begs the question still: what does this sentence mean?

Usually, salvation from damnation; from an eternity in hell, in the burning flames of Hades, in the sulfurous tides of the land where those who enter must abandon all hope.

What a Chick tract means, in other words.  I've never been a fan of Chick tracts, but then Hitler liked dogs, too, so Chick tracts are not reason enough to set aside the traditional doctrines of Christianity.

Well, not Chick tracts alone; but the whole idea of salvation has, by and large, been a club Christians have used to beat up either other non-Christians, or other Christians they deemed insufficiently "Christian" enough for the holy tribute of salvation.  Soteriology is what led to Calvin's bizarre and ultimately perverse doctrine of the elect, and a soteriology his followers used to turn Christianity inside out.  I am thinking particularly of TULIP (which, no, is not Calvinism; except it is, once the doctrines move far enough away from Calvin's Institutes.  I am not blaming Calvin for the state of Christianity today; but I am blaming soteriology, which too many Christians think is the be-all and end-all of Christianity.).  TULIP is nothing more than a cudgel to be used against to motivate people to act as we would wish them to (and as we are sure God would wish them to).  Indeed, making people behave has become the primary purpose of soteriology.

We use it to make people join "our" church, to make people think as we do, or just to make people be civilized.  The root of the fear that the "death of God" would undermine society (and the modern day attack on Christianity, that morality can only come from a deity) was that, absent a fear of damnation (God is dead), what would keep the great unwashed on the straight and narrow?  That it had never kept the leadership in line was beside the point; but directly to the point of the purpose of soteriology (which is, after all, a human doctrine.  I don't remember Christ espousing one in the gospels.)


There are nuances, of course; variations.  Not everyone who believes in individual salvation as the central doctrine of Christianity agrees with Baroness Thatcher:

They stem not from the social but from the spiritual side of our lives, and personally, I would identify three beliefs in particular:

First, that from the beginning man has been endowed by God with the fundamental right to choose between good and evil. And second, that we were made in God's own image and, therefore, we are expected to use all our own power of thought and judgement in exercising that choice; and further, that if we open our hearts to God, He has promised to work within us. And third, that Our Lord Jesus Christ, the Son of God, when faced with His terrible choice and lonely vigil chose to lay down His life that our sins may be forgiven. I remember very well a sermon on an Armistice Sunday when our Preacher said, "No one took away the life of Jesus , He chose to lay it down".

Thatcher carefully distinguishes "spiritual" from "social," and makes it clear throughout that her emphasis is on the individual, that, as she famously said elsewhere, "Society does not exist."  "Man," in that first sentence, is clearly an individual:  only individuals choose good or evil.  And it is up to us, as individuals, "to use all our own (!) power of thought and judgment in exercising that choice."  And it is only after we have done so that we can "open our hearts [not the seat of thought and judgment] to God," who has "promised to work within us."  Because, after all, that's what Jesus did.

Which is one of the weirder theories of the crucifixion I think I've ever heard.  It's supported, to some degree, by John's gospel; but everybody agrees John's Jesus is the least human of the four representations in the canon.

The third is the oddest also because it doesn't connect to the acts of thought and judgement of the individual, or even of God entering your heart and working within you.  What it does connect with, is that even God has to make individual choices.  What it tells me is that even God is all alone.

Which is a very chilling place to put the emphasis (and not at all what the author of John's Gospel meant).  If Thatcher means to use it to make God "one of us," then it's even worse.  But it does explain the complete lack of Christian humility in Thatcher's speech.  Why be humble when you are equal to God?

Follow that reasoning very far, or even take it up at all, and you wind up at Mars Hill Presbyterian Church, which is not a place I want to be:

Human beings are totally corrupted by original sin and predestined for heaven or hell, no matter their earthly conduct. We all deserve eternal damnation, but God, in his inscrutable mercy, has granted the grace of salvation to an elect few. While John Calvin's 16th-century doctrines have deep roots in Christian tradition, they strike many modern evangelicals as nonsensical and even un-Christian. If predestination is true, they argue, then there is no point in missions to the unsaved or in leading a godly life. And some babies who die in infancy — if God placed them among the reprobate — go straight to hell with the rest of the damned, to "glorify his name by their own destruction," as Calvin wrote. Since the early 19th century, most evangelicals have preferred a theology that stresses the believer's free decision to accept God's grace. To be born again is a choice God wants you to make; if you so choose, Jesus will be your personal friend.

And we all know personal friends are people just like us.  Why be humble when God is your BFF?  Why be a servant when you pal around with the Logos that created the cosmos?  A little of that goes a long way, and it goes a long way in the wrong direction, for my taste.

But are we totally corrupted?  Do we all deserve eternal damnation?  Is that any better than Jesus being my BFF?  And can I set any of this aside without completely re-writing traditional Christian soteriology?

Even Luther runs afoul of his own reasoning on this.  Luther decided it was God's grace that saved us, and that God's grace is wholly unmerited, because there is nothing we can do to merit it.  Yet we must do something.  We must choose to accept that grace.  Apparently if we don't, we're still damned.  Which means we were damned from the beginning, damned before birth, and only the right choice will save us.  Which means the grace is not unmerited; we only merit it if, like the characters given the decision to choose the chalice in "Indiana Jones and the Last Crusade," we choose wisely.  Everyone watching that film knows the Nazi will not choose wisely.  He's the bad guy, they never make wise decisions.  He doesn't deserve grace because he's made too many bad choices.  He deserves only damnation.  But to switch back to Luther, we've all made bad choices, we all deserve damnation.  How is it this one choice determines our salvation?  And if it does, how is grace then unmerited?  Are we left only with the simplistic version of Pascal's wager:  it's better that I choose God than not, just to be safe?  What kind of choice is that?  What kind of soteriology is that?

So eventually grace comes to us because we make the right choice or we think the right thought or we say the right words (whether we mean them or not, even God doesn't know).  What is the point of this tail-chasing?  Historically it's been to establish precisely what Jesus specifically preached against:  a hierarchy where the believers, or at the worst extreme the "elect," get to claim privileges for themselves above all others.  And that is not only a perversion of the most basic Christian teachings, it's reprehensible.  Dare I say, it is the fundamental heresy?

If I profess a soteriology now, it is a soteriology of life, not an after-life.  My sympathies are with the nuns and monks who work especially with the poor, the ones who, as Windhorse noted:

... are concerned with trying to find food and clothing and medicine for the least among us, not lecturing them on sin or hypostatic union. Mother Teresa did not try and "save" Hindus or Muslims or Sikhs, just help them. As a result, she has become a powerful and inspiring example of Christian values while, conversely, the likes of salvationists like Jimmy Swaggart and Ted Haggard and Pat Robertson have done immeasurable [harm] to the Christian message.

I have never been so comfortable with Christianity as I have in those moments when I realized I was trying to help someone in the name of Christ, rather than to "save" them from a fate I don't think anyone is born to deserve.