No communion for you! 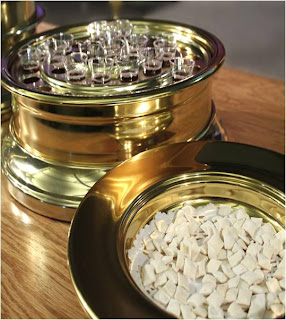 My gut reaction is to wonder when Jesus ever said:  "You!  Away from the table!"  Not to the woman in Luke 7; not to Zaccheus; not even to Judas.

A Detroit professor and legal adviser to the Vatican says Catholics who promote gay marriage should not try to receive holy Communion, a key part of Catholic identity. And the archbishop of Detroit, Allen Vigneron, said Sunday that Catholics who receive Communion while advocating gay marriage would "logically bring shame for a double-dealing that is not unlike perjury." The comments of Vigneron and Edward Peters, who teaches Catholic canon law at Sacred Heart Major Seminary in Detroit, are part of a polarizing discussion about gay marriage that echoes debate over whether politicians who advocate abortion rights should receive Communion.


I know the historical power of excommunication, but that was some time ago.  I don't know what the Church position, or its canon law, is now on the situation.  Which is to say I don't know what effect it would have for Catholics to deny themselves Communion, or to be denied (other than the public embarrassment) at the altar.  Considering the number of Catholics who are "lapsed" or no longer regularly attend Mass, I'm guessing this is much more a symbolic gesture than ever it was.  And really, the argument being made is a private one:  the authors want to shame, or self-shame, those they disagree with on a moral issue.  I suppose they are without sin, and so get to cast the first stones....

Because it takes some serious stones to put forward a position like this.

What is the morality of refusing someone a place at the Lord's table?  I understand the arguments that it is to be reserved only for the baptized.  My own UCC has in its heritage a service of preparation every E&R church member had to attend in order to take communion (which, in good Reformed tradition, was only served four times a year).  If you didn't bring your token from that service, you didn't get to go to the altar.

There was a church in Austin, Texas that made a member of an atheist.  He confessed no faith in Christ, but he was offered membership anyway.  I agreed with that move, though it created a stir within the Presbytery.  Should non-believers be allowed to the table?  Do we defile it by allowing them to come?  That was a hot issue in seminary.  We were challenged to defend a defended table, or a completely open one.  I don't know anyone who practiced a completely open table (all are welcome), but I don't know of anyone who checked baptismal certificates at the door, either.

Part of this is the laity once again being more devout than the clergy.  Laity love this kind of stuff:  certain people are allowed here, certain people aren't, and ideally the clergy is the gatekeeper.   I actually had a church member insist I bar another church member from entrance to the church; not on theological grounds but on purely personal ones.  I suppose it would be easier for me to refuse to offer him communion, but I would no more do one than the other.  Still, lay people are generally more keen on purity and holiness than the clergy generally are.  Interestingly, the class of people who are usually least interested in purity, and most interested in people, are the monks and nuns who devote their lives to God by devoting themselves to service.  I've always thought their devotion to God gave them the right perspective on matters of holiness.

I don't presume either the professor or the teacher of canon law speaks for Rome, so I don't assume their words carry any more weight than mine.  But it's always struck me as an issue of theology and hospitality (and I contend the two are virtually one, or should be; especially where matters of ecclesiology are concerned), not to mention ethics, about who has the standing to refuse anyone the grace of God's table.*  Jesus, after all, didn't check the baptismal records before he ate with sinners and tax collectors, and there's no record I know of that any of the twelve that night had been baptized and, as I say, one of them turned bad, but was allowed at the table anyway.

Maybe we're supposed to correct that?

(*I suppose someone does if it's the church's table.  Which it is, actually; Protestant or RC, the table is offered by the church in the name of God.  Who, then, do they offer it to?)