Of shootouts and reality 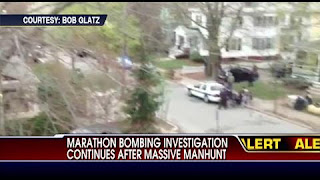 We've been here before; and we're here again:

Two U.S. officials say investigators in the Boston bombings have recovered only one handgun believed to have been used in a gun battle with police.

One official said the serial number on what they described as a 9 mm pistol was scratched off. They spoke on condition of anonymity because they were not authorized to publicly discuss details of the investigation still in progress.


Why is this of any significance?

Boston Police Commissioner Ed Davis says over 250 rounds were fired in the shootout.


Which means most of them came from the police; and yet one man was killed, apparently by being run over, and the other escaped with injuries serious enough to leave him bleeding in the boat where he was found, but not serious enough to kill him after several hours without medical treatment. Oh, and about the boat; there was a shootout there, too:

Davis said shots were fired from the boat where Tsarnaev was found. It wasn't clear whether he was armed when he was captured.

We already know bullets were flying furiously in the first gunfight.  More than one resident in the neighborhood of that fight reported bullets flying through their houses.  What about all those bullets flying during the second?  Why wasn't the boat reduced to splinters?  Why wasn't Tsarnaev reduced to a bloody pincushion?  Who was shooting, and what were they shooting at?

Is anybody going to ask?

And, not tangentially, what would the scene be if even half of the witnesses to either gunfight had come out with their guns blazing?

After I wrote that, this was reported:

The officials, speaking on condition of anonymity because they were not authorized to discuss the ongoing investigation, say investigators recovered a 9 mm handgun believed to have been used by Tsarnaev’s brother, Tamerlan, from the site of a gun battle Thursday night, which injured a Massachusetts Bay Transportation Authority officer. Dzhokhar was believed to have been shot before he escaped.

The officials tell The Associated Press that no gun was found in the boat. Boston Police Commissioner Ed Davis said earlier that shots were fired from inside the boat.

Granted, there is still a great deal of confused reporting coming out of this series of unfortunate events; but details like this are seldom confirmed in official disclosures without some intense questioning of the official statements.  This does begin to answer the question of whether Tsarnaev was armed when he was captured.  We've heard the videotape of the gunfire that went off when they determined Tsarnaev was hiding in the boat.  But who started shooting, and why?

And where the hell did all those bullets go?