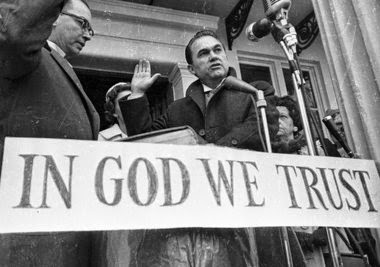 When George Wallace declared "Segregation now; segregation tomorrow, segregation forever!", no white church that I know of in Alabama rose up to oppose his statements as being in violation of their religious beliefs.

Indeed, if Dr. Martin Luther King's Letter from Birmingham Jail is accurate, the churches in Alabama mostly rose up to oppose the actions of Dr. King and the civil rights marchers.

So this is a curious request:

Just one day after the Supreme Court’s decision in Burwell v. Hobby Lobby Stores, Inc., 14 faith leaders have written a letter to President Obama, asking him to include a religious exemption in his planned executive order barring hiring discrimination based on sexual orientation by federal contractors.


If you were to change that exemption from sexual orientation to race, no one today would put their hand to it.  Oh, they might have done in 1964; but not 50 years later.

What a difference a half-century makes.....