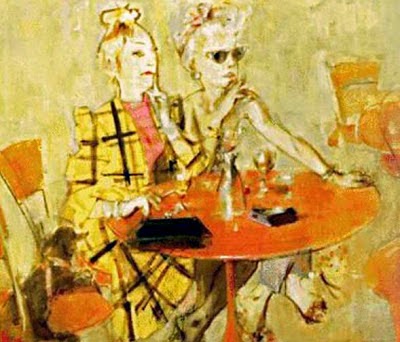 Nothing else came to mind, and I liked this.  Otherwise, it has nothing to do with the post.

I had a rather elaborate post worked out about this; and then I realized Richard Dawkins was just being stupid:


The stupidity is quite simple and entirely on the surface (and yes, you'd think he'd know to stay away from the subject of pedophilia).  What Mr. Dawkins implies here is that rape by a stranger is worse than rape by an acquaintance ("date rape").  The knife is the red herring, because an acquaintance wouldn't "need" a knife, and if he pulled one, he'd become a stranger, n'est pas?

So, you see, what Dawkins is really arguing is the definition of rape.  That is:  when is rape "legitimate rape"?

Now, this conclusion may not seem clear until you understand R (rape) is not the same crime as  R+V(Violence).  At that point, the knife being added to threaten the victim, you have two crimes:  rape plus assault with a deadly weapon.  Two crimes are objectively worse than one; that's why we have a felony murder rule.  If you commit a felony, say robbery, and in the course of the robbery kill someone, you've now committed felony murder, and your intent in the murder (maybe the death as inadvertent) is of less interest than it might be if you were merely negligent in the use of a firearm.  The commission of one crime makes the second crime worse.   So R+V is worse than R, but not because the R in one case is significantly different from the R in the other case; it's because you've added something else to the criminal acts.

But Mr. Dawkins' analysis implies there is a difference in the rape between R and R+V, and that difference is that the presence of the knife distinguishes acquaintance from stranger, and if you have to be raped, isn't it "better" coming from a friend?

I mean, it's bad; but is worse if it's a stranger, right?  The knife just distinguishes the stranger from the friend, if you discount the fact it makes two crimes instead of one.  Because unless you discount the additional crime there is no comparison; and if you do discount it, then date rape is a lesser sexual assault than rape by a stranger, which can only mean some rapes are more "legitimate" than others.

Which is utter bollocks; and makes me think the entry level requirements for Oxford dons aren't what they used to be.  Because knowing how to think no longer means what it used to mean.