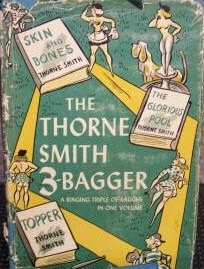 Wandering through the local thrift store (donations turned into sales for various charitable purposes), I found the above, sans colorful dust jacket.  The picture of the woman just to the left of Skin and Bones was embossed on the spine, and it was rather obvious she was meant to be undressed from the waist up, except for the hat and baseball glove.  This I thought odd in a book clearly not meant to pornographic.

I'd never heard of Thorne Smith, but popping it open I found Topper in the table of contents.  I know Topper from the Leo G. McCarroll TV show first (and Leo G. McCarroll from his stint on "The Man from U.N.C.L.E.", from my childhood.  "Topper" I knew from re-runs, later), and while the TV show isn't a patch on the original movie with Cary Grant (the first one, I mean), I still remember it fondly.  So, I found, this was the guy who wrote Topper.  That almost made the volume appealing.

Oddly, Topper was the one book in this omnibus with no illustrations.  Maybe because that story doesn't involve rich men with mistresses, the way the other two books apparently did.  (I got the impression Thorne Smith was the American version of P.G. Wodehouse, but with rich old men chasing nubile young women, rather than wooly-headed British aristocrats avoiding domineering women.)  The other two entries were lavishly illustrated, every one including at least one fully naked woman, if not merely topless, usually in a roomful of fully dressed men.  The copyright was 1934, and it was a Doubleday publication.  It took me a while to square the circle and figure out this is what passed for "adult entertainment" in print in the days before Playboy and Esquire (which never had the foldouts, but did have the semi-nude photographs of women, although not on quite as regular a basis.  Down right prim, actually, compared to Hefner's publication.  Don't bother asking how I know this....)

What struck me as really funny is that this was the time when Hemingway was being blasted for his "disgusting" works, including (probably; I'm no Hemingway scholar, but I've just polished off a volume of his complete short stories) one strongly inferring a young wife is a lesbian, and a few where Nick Adams makes the beast with two backs in the woods with young women, in prose so obtuse and embarrassed to be violet, much less purple, I was embarrassed for it.)  James Joyce, of course, was even worse, for reasons I still don't quite understand.  I'm assuming Thorne Smith never described the "act of love" nor dwelt much on the nudity of his females in prose.

But cartoons drawings of undressed women?  Sure, why not?

Of course today only strictly "Christian" bookstores (or Muslim, for that matter) might eschew 50 Shades of Grey on their bookshelves; but the trailer for the movie was apparently too racy for broadcast TV.

The past really is another country, and yet curiously the same as ours.