"Welcome back, my friends, to the show that never ends...." 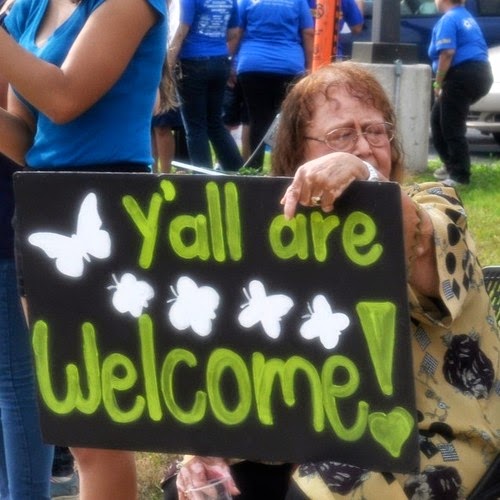 I started this days ago, then froze it.  Events have decided me to publish it after all, with an addendum.

This rally really isn't as surprising as ThinkProgress imagines it is.

Texas is a big state, both geographically and demographically.  As I've said before, you can draw a line from Houston almost straight across to El Paso (800 miles away; I told you it was big); and everything south of that line is culturally Mexico.

When you get down to cities like McAllen, it IS Mexico.  And that's a good thing.

The counties of South Texas, especially along the Rio Grande, went for Obama in both 2012 and 2008.  The river, which is the U.S. Border in Texas, is simply a water feature between Texas and northern Mexico.  People are casually bi-lingual all along the border, and move back and forth across the river as easily as New Yorkers cross to Manhattan Island and back.  Most people have family on both sides of the border.  Any example you can cite of a xenophobic Texas politician (and I can cite many), is always a resident north of the line I just imagined.  Always.

You'll notice some of the signs ThinkProgress highlighted at that rally are in Spanish.  That isn't an accident, nor is it some measure of pandering.  The border is resolutely bi-lingual.  And sentiments like this are typical of life along the border:

Linda Yanez, a former state judge, told ThinkProgress that these children should be given the right to plead their cases in front of an immigration judge, and that any proposed legislation would actually harm their ability to do so. “I’m not against the Border Patrol, they’re just doing their jobs,” Yanez said. “It’s about our policy lawmakers and about what they tell our Border Patrol to do. I’m here to support due process.”

“The fact that gangs and drug lords have the biggest influence is something we can’t ignore,” Yanez added. “It’s a life and death situation… It’s Sophie’s choice. If these are my choices, I’m going to take the one that gives my child some chance at survival.”

That's what this situation on the border is about; a situation that, as TP notes, has been going on since 2009, and only gotten worse as conditions in some countries in Central America have gotten worse.
Which just means Ted Cruz, who doesn't get any votes from the Border, is even more of an ass.

The dichotomy of Texas is captured perfectly by this town hall meeting in Longview, a town much closer to Texarkana than it is to McAllen:

The tea party conservative representing Longview in Austin was criticized from the right Wednesday as he advocated compassion for immigrants and outlined legal steps that can be taken at the state level.

Republican state Rep. David Simpson also told an audience of about 160 people about flights from abuse and sexual slavery that state and federal officials described as a big part of what’s driven thousands of Central Americans to the Texas border.

“I believe your constituents should come first when you talk about people who are impacted,” Terri Hill of Longview said during a town hall session that followed a slide show of Simpson’s recent tour of the southern border. “You are to represent us, and we have children. These (immigrants) are people that are coming in with leprosy, tuberculosis, polio.”
....
Simpson’s combined approach of compassion for children beset by predators tempered with more stern action along the border wasn’t always what the crowd wanted to hear.

A letter sent Monday from the state Homeland Security and Public Safety Committee chairman to Simpson and fellow House members reported three cases each of tuberculosis and H1N1 flu and “minimal” cases of chickenpox and some scabies, lice and rashes among the so-called unaccompanied immigrant children.

“I’ve got four kids and a fifth one on the way,” Ben Denson of Gilmer told Simpson from a forum microphone. “These (Central American) kids have scabies and influenza, viral pneumonia, leprosy. These kids are going to be part of the school system. ... They are bleeding Texas (Democrat) blue.”

Simpson maintained a defense of the children he saw during his trip the first week of July.

“These children are fodder in this,” he said. “They are being assaulted. ... I don’t believe in amnesty. I don’t believe in treating people who’ve crossed the border as a murderer. ... I do think there should be a path, a legal path, for naturalization or citizenship. We’re a nation of immigrants.”

Simpson also was skeptical of the notion voiced by some that a special session of the Texas Legislature would accomplish much in addressing the border dilemma.


The call for a special session (the Texas Lege meets for only 140 consecutive days ever two years) is a new one on me.  What the Texas Legislature could do is beyond me, since border control is a solely Federal enterprise.  But the panic spouted in this town hall is peculiar to that part of the state that is not Mexico.  Kudos to David Simpson for being a human being about this problem, and not a caricature.  Sometimes a representative government is not what you want.

But since this meeting was held at a Baptist church (and knowing Longview, most of the people there were probably Baptists), a little of that old "wrath of God" they love to call down:


Woe unto them that decree unrighteous decrees, and that write grievousness which they have prescribed;

To turn aside the needy from judgment, and to take away the right from the poor of my people, that widows may be their prey, and that they may rob the fatherless!

And what will ye do in the day of visitation, and in the desolation which shall come from far? to
whom will ye flee for help? and where will ye leave your glory?


Without me they shall bow down under the prisoners, and they shall fall under the slain. For all this his anger is not turned away, but his hand is stretched out still.

25:41 Then he will say to those at his left hand, 'You that are accursed, depart from me into the eternal fire prepared for the devil and his angels;

25:44 Then they also will answer, 'Lord, when was it that we saw you hungry or thirsty or a stranger or naked or sick or in prison, and did not take care of you?'

Not really interested in the condemnation language there, but c'mon people; get some perspective! Or maybe this is just another object lesson in the dangers of hospitality.