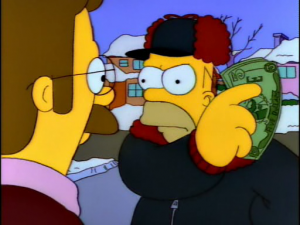 Mr. Plow will gladly take your money while still refusing to shovel your driveway.

NTodd (no surprise) is right, this is important:

Your employer does not receive any tax benefits for compensating you with Hummel figurines or automobiles instead of wages. It does, however, get tax benefits for compensating you with health insurance instead of wages. (It would be nice if health insurance were decoupled from employment entirely, but needless to say this isn’t the alternative preferred by conservatives like McArdle.) Because of this, the insurance provided in lieu of wages actually has to cover things. After the ACA was enacted, contraception for women became one of those things. Women compensated by employers, in other words, have a statutory right to have contraception covered if they choose to use it. This is not, as McArdle suggests, a “side payment.” It’s part of an employee’s compensation package. What Hobby Lobby wants is to pocket the tax benefits for compensating their employees in health insurance but not to provide the full benefits to their female employees. (Mr. Plow remains very influential among contemporary Republicans.)

So, in other words, critics of the decision are correct to note that yesterday’s opinion denies employees something they’re entitled to.

This is a problem lawyers grapple with all the time (and not always successfully):  the entirety of society and the laws which create it and support it and benefit it, are a complex web:  touch any one strand, and you tremble the whole.  This is why courts are advised to be circumspect and rule only on the facts before them; because the consequences of dramatic shifts in law (Corporations have religious rights!) can have consequences not even contemplated by the Court in its opinion (yes, what Ginsburg was warning against).

So, here, I'm left wondering what "religious principle" allows the five owners of Hobby Lobby to trump the property interests of their some 3000 employees, and decide there are certain things they are no longer entitled to as compensation (which wasn't a problem until it was a problem), even as they keep the tax benefits of providing compensation they are withholding.  I understand the First Amendment (which doesn't apply here) provides for freedom of religion; but doesn't that freedom end at my nose?  Especially since Hobby Lobby is a business, not an eleemosynary institution.  I understand excluding churches and even church-related operations from this provision of law; but one definition of those churches which supposedly distinguishes them from for-profit corporations is that designation:  "For-profit."

Of course, now the Court has waved away that distinction, so what distinction is left?  I wonder if that won't become a pertinent question.