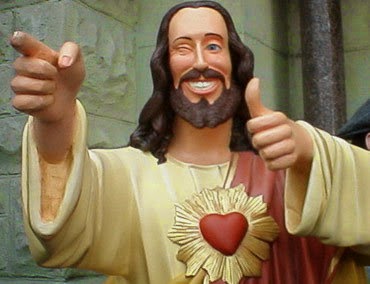 Because sometimes you need a buddy....

This is fascinating.  It may even make me change my attitude toward Burwell.  Then again, it ends here:

What remains, as Clifford Geertz reminds us, is for us to work on creating new fictions together, political, legal and religious:

The primary question . . . now that nobody is leaving anybody else alone and isn’t ever going to, is not whether everything is going to come seamlessly together or whether, contrariwise, we are all going to persist sequestered in our separate prejudices. It is whether human beings are going to be able . . . to imagine principled lives they can practicably lead.

Judges cannot do this work.


Which kind of undermines Burwell, and certainly undermines any possible legislative or even legal solution to the conundrum of what is called in the article "Big 'R' religion."

I cannot summarize the argument; it's too subtle for that, I'd do it damage.  I can focus on a few key points, by drawing out quotes:

You cannot both celebrate religious freedom and deny it to those whose religion you don’t like. Human history supports the idea that religion, small “r” religion, is a nearly ubiquitous and perhaps necessary part of human culture. Big “R” Religion, on the other hand, the Religion that is protected in constitutions and human rights law under liberal political theory, is not. Big “R” Religion is a modern invention, an invention designed to separate good religion from bad religion, orthodoxy from heresy — an invention whose legal and political use has arguably reached the end of its useful life.


That lays the groundwork, though I must say not as clearly as I would like.  The distinction between "Big 'R' Religion" and "small 'r' religion" is never as clear as it could be, but the distinction lies here:

That American religion is involved in business and obsessed with sex is not news. What is surprising is that those who object to this kind of religion continue to hold on to a faith in the idea that religious freedom means protection only for the kind of religion they like, the private, individualized, progressive kind.

But this is the heart of the matter; and here, I think, the argument becomes almost unassailable:

The notion that religion exists and can be regulated without being defined is a fiction at the heart of religious freedom protection. Legal fictions — such as the idea that corporations are persons — are, of course, necessary to law. For legal scholars as diverse as Henry Maine and Lon Fuller, the capacity of legal language to finesse the facts could be understood as making legal flexibility and progress possible. The startling unbelievability of legal fictions can also focus our attention on the limits of legal language in a salutary way. Yet legal fictions can be stretched too far. They can become nothing more than lies.

Fictions, despite the more literal minded atheists and logical positivists one encounters on-line, are necessary to human existence.  But we don't need to go far afield to establish this:

Religion also specializes in fiction. It is not just the corporation that has fictional legal personality. So does the church. Justice Ginsburg objects to free exercise protection being extended to “artificial entities,” referring to corporations, but religious freedom is all about protecting artificial identities. The church is an imagined artificial entity; so are gods and demons. The church is the body of Christ in orthodox Christian theology; like the sovereign, it is the quintessential legal fiction, as we learn from Ernst H. Kantorowicz in “The King’s Two Bodies

We need fictions to live. But when the church and the state went their separate ways — when the church was disestablished — the intimate articulation of political, legal and religious fictions lost their logic on a national scale. They no longer recognize one another. The legal and religious fictions of religious freedom have become lies designed to extend the life of the impossible idea that church and state can still work together after disestablishment. There is no neutral place from which to distinguish the religious from the non-religious. There is no shared understanding of what religion, big “R” Religion, is. Let’s stop talking about big “R” Religion.


I've left out most of the discussion of Burwell and the dissent in the Wheaton College temporary injunction order.  The critiques of Ginsberg and Sotomayor are insightful, and perhaps decisive.  I haven't decided yet.